The news stops for no one. People keep doing dumb, funny, sad, and happy things around the world and news sites are the first to report on events and keep people informed. One popular form of news story is the News Quiz, where the host site tests its readers on current events or really any subject of interest.

At Interact we’ve been lucky to have some of the world’s largest news organizations as well as no-name sites create News Quizzes that have gone viral in some sense. Below I’ve picked ten of my favorites for your viewing pleasure. (stay tuned at the end for a guide on how to make your own quiz)

For a site as large as The Telegraph, having the ability to create specific quizzes for different segments is crucial to continuing a dominant position in the news industry. That’s why they use Interact to create and share quizzes for all sorts of purposes. The one below is part of their real estate division, and was highly shared, driving tens of thousands of pageviews from social media back to The Telegraph. 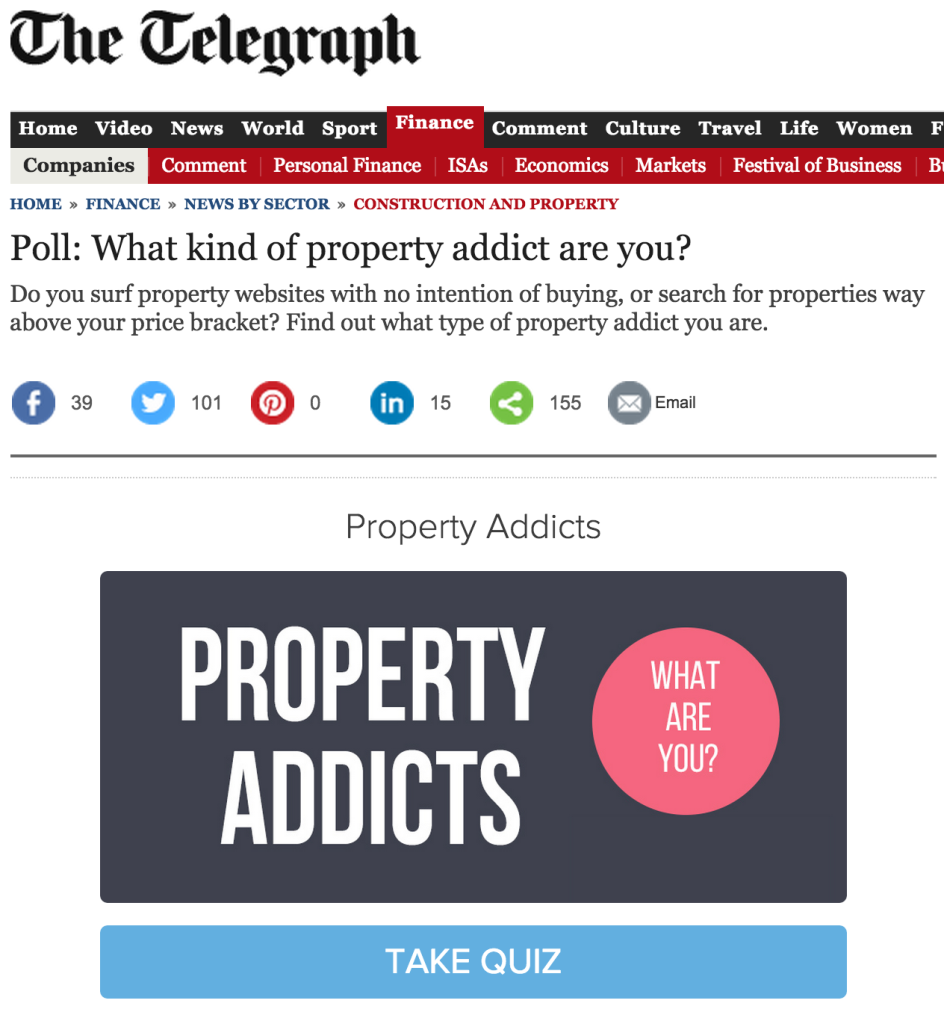 The poster child of internet news ingenuity, The Huffington Post does news quizzes very well. This one in particular was published on December 29th 2014 and by January 1st 2015 it has amassed more than 22,000 views. I attribute the success to a well-timed publishing (end of the year) and a bit of snarkiness that made it a hit with the social media crowd. 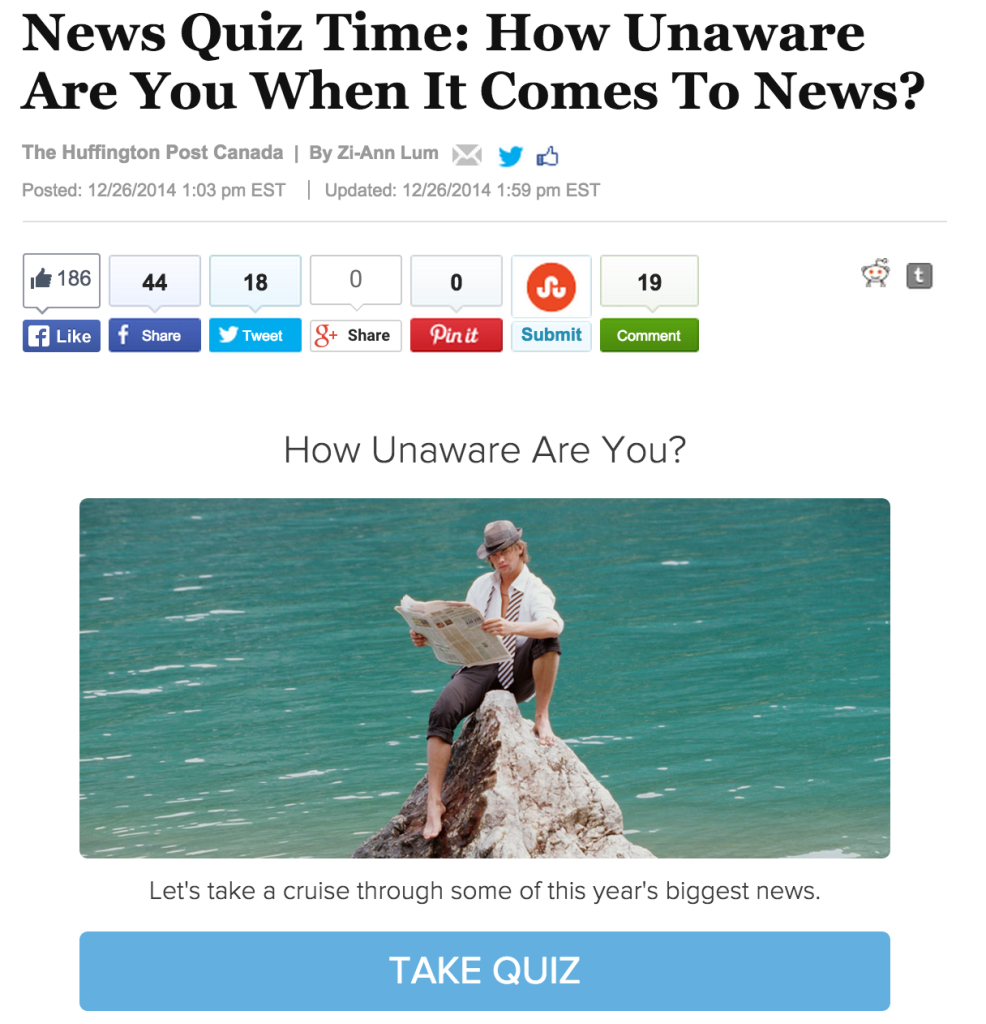 I think karma has made NPR our most successful news quiz client. We now work with branches of the site ranging from Seattle to Texas to New York, and each quiz an NPR affiliate makes is better than the last. Their latest rendition is this Beer, Coffee, or Crude oil quiz that is not only hilarious but also relevant to the current news with oil prices catching headlines all over the world. 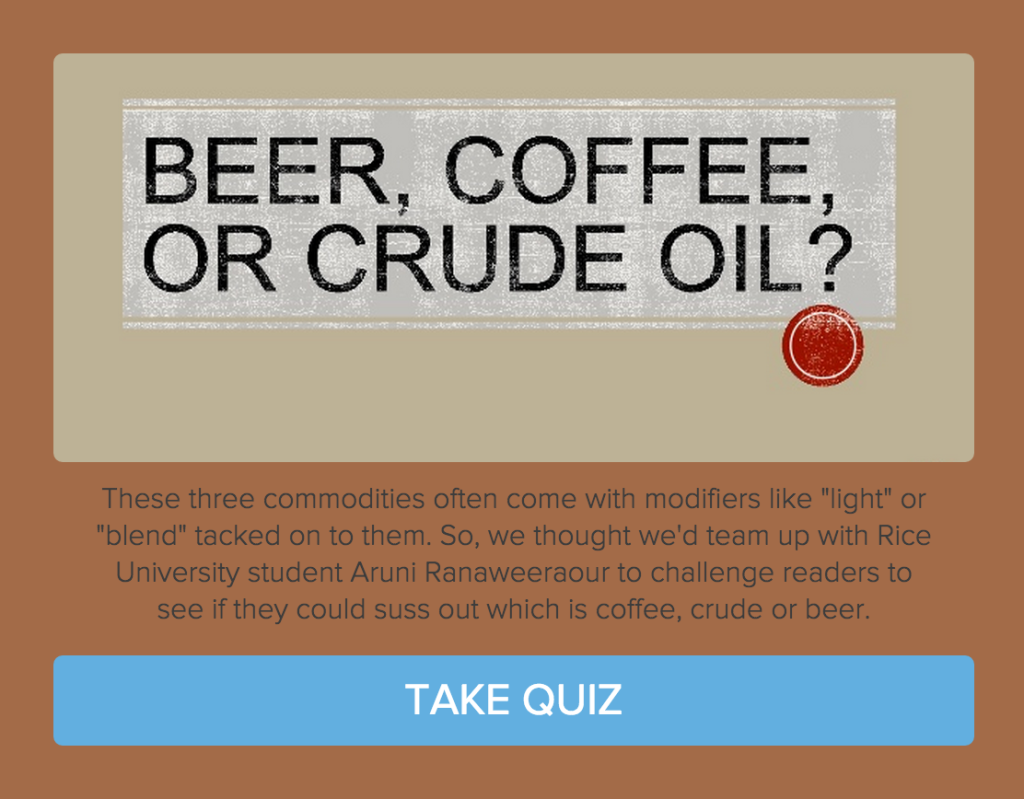 NPR again, this time with a more traditional approach to the news quiz. ‘The Record’ is a weekly wrap-up of what’s going on around the world, and as part of the segment the Seattle branch of NPR has started creating quizzes to test viewers’ knowledge. So far they’ve had really good success getting the quiz results shared as people compete for prowess in their knowledge of current events. 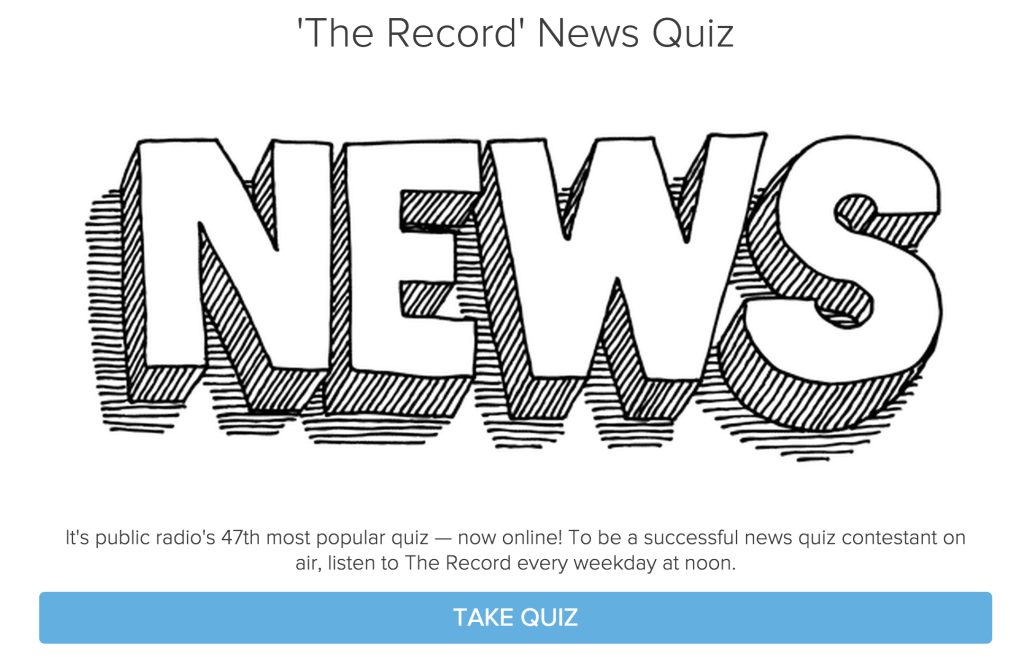 Another public news company absolutely nailing it with quizzes, Southern California Public Radio has begun augmenting their live broadcasts with online quizzes. For example, the quiz below is about pizza, and it went live simultaneously with a one-hour radio segment about pizza.

The result was a massive amount of traffic to the website, and if you’ll give me a minute I’d like to dive into why this is awesome. Okay, so the radio by itself is naturally a passive entertainment system, at least since we now have a million other forms of entertainment. So if someone is listening to a radio show about pizza places in LA, odds are they are also doing something else on their phone or computer at the same time.

If SCPR wants the full attention of its audience while they listen to the show, it need a supplement, and quizzes turned out to be the perfect solution. 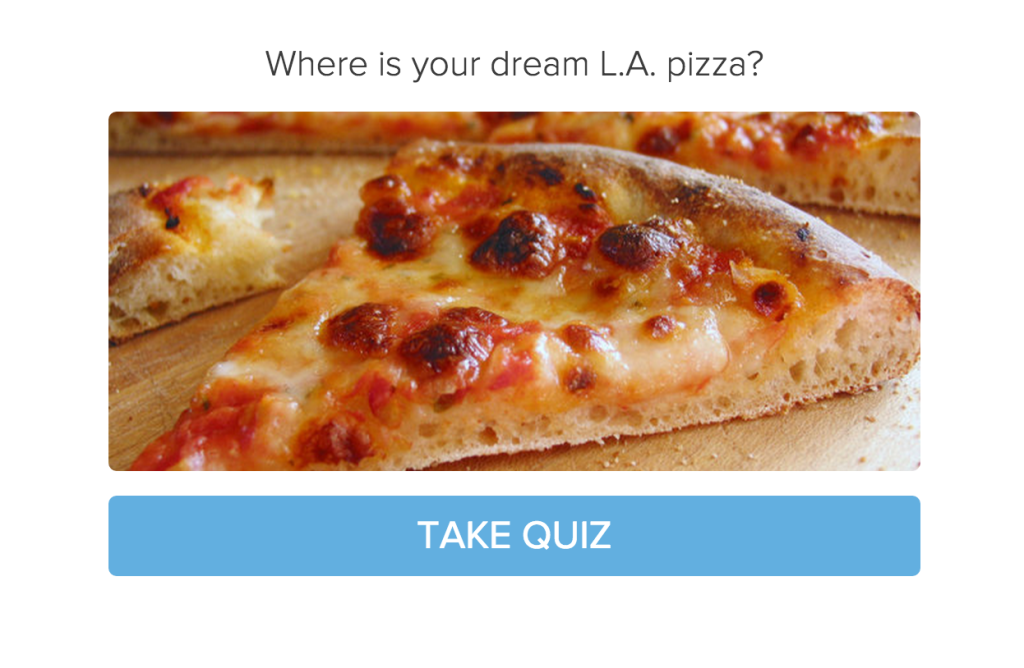 Iran is in the news a lot, and almost always in a negative light. Berim is an organization that focuses on helping entrepreneurs in Iran. Berim created a quiz to help shift the perception of Iran that’s usually portrayed in the media by making a quiz “How much do you know about Iran?”

It was a hit, quiz takers were often shocked by how little they actually knew and weren’t afraid to share that surprise on Twitter and Facebook, leading to thousands of shares and tens of thousands of pageviews. 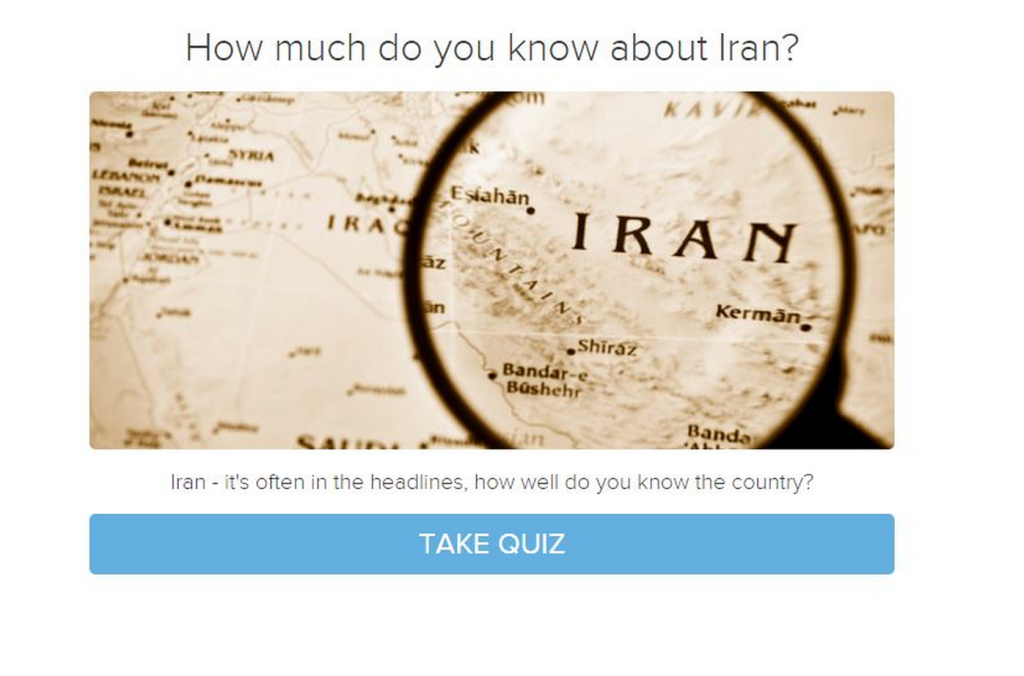 The ISIS news has now died down a little, but at its peak you couldn’t even look at a news site without hearing talk of the terrorist group wreaking havoc on the world. Someone who won’t be named for privacy created the quiz you see below titled “Who Said it: ISIS or Hamas?” and what happened next was crazy.

A flurry of tweets and shares by everyone from David Rubin to the Israeli Embassy of New York took the web by storm as opposing sides battled over the issues at hand. To be honest it got a little scary given the sensitivity of the subject and the people who were getting involved (a former British army general even chimed in).

Again this quiz was quite literally created by someone random and it blew up, it doesn’t take anything to launch a quiz if you bring up a strong issue. 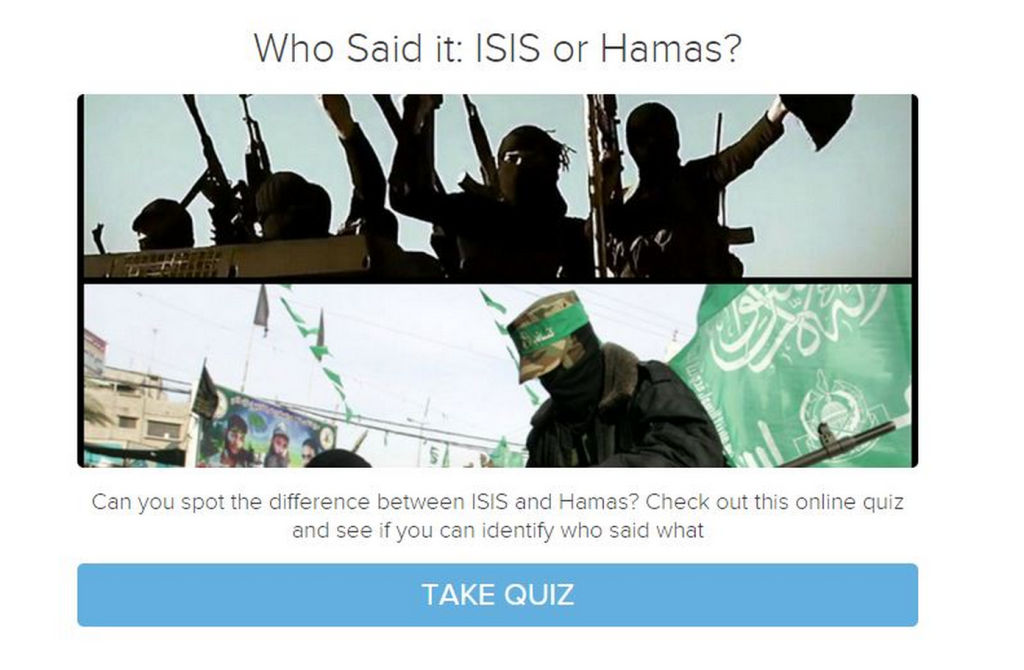 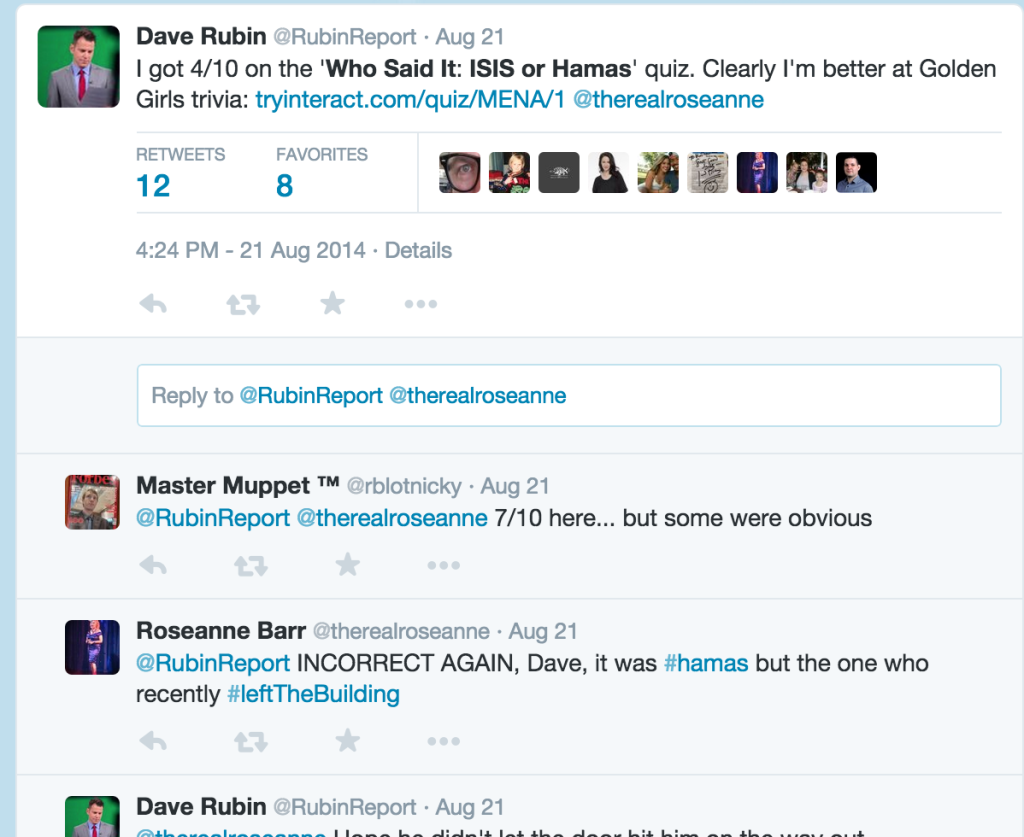 This is quite honestly one of the weirdest phenomenon I’ve seen happen with quizzes. There was a trial for the Governor of Virginia over some scandal and a political satire site decided to create a quiz mocking the ridiculousness of it all. Then all of a sudden it got picked up by The Washington Post and a bunch of reporters including Rachel Maddow. The quiz took off and made the host site famous for a day.

Before it was cool to make news quizzes Portland Monthly was making cool quizzes. They also show us one of the smartest ways for local news sites to utilize quizzes. Being local and somewhat limited in your target audience is an advantage when you know how to use it to your advantage. Portland Monthly used the fact that they only have a target audience of Portlanders as a way to reach a large percentage of people living in the city. The quiz they made was titled “Portland IQ” and was created with very little style, but it worked like a charm, reaching 34,000 people and remaining one of the most shared posts on PortlandMonthly.com for all of 2014.

Another well done year-in-review quiz, Leading Britain’s Conversation is a fun news site that’s using quizzes as interactive pieces for a variety of concepts on their site. They did one on political candidates and this one to end the year, quizzes can be used all over the place on news site. 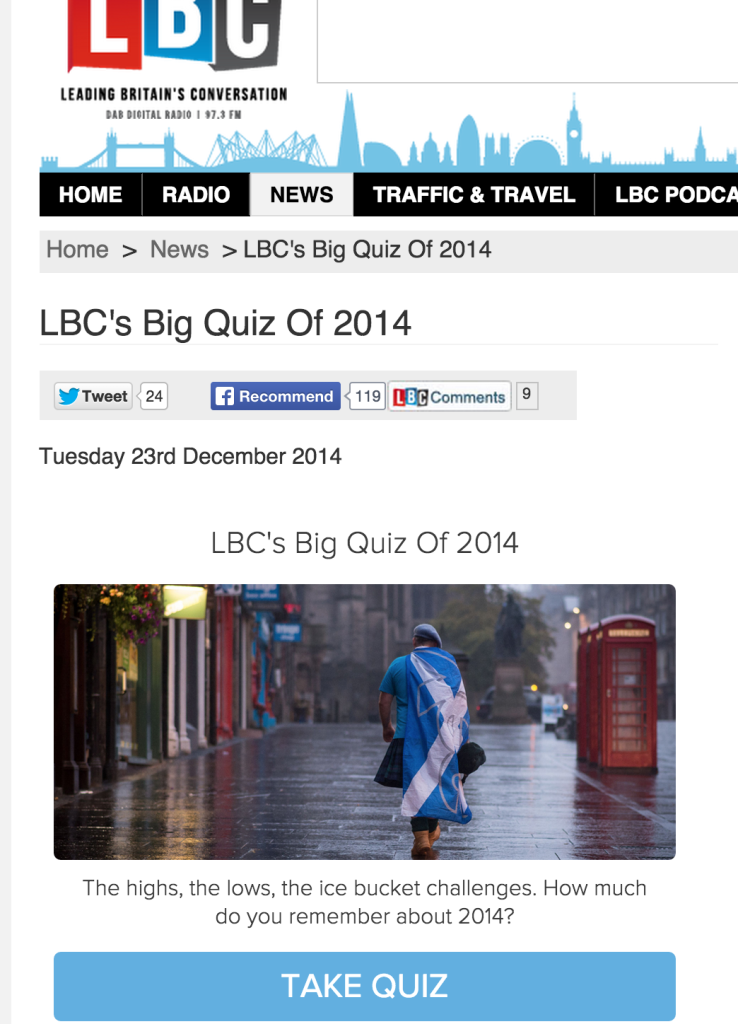 Now how to make your own news quiz

Right, so a lot of these quizzes are basically the same thing just adapted to different stories and angles. That means we are able to put together a nice guide for you to work off of when making your quiz. Let’s dig in.

1. Decide on a subject

The news…duh. But that’s not the only subject for news quizzes ironically. The most popular quizzes are typically one of three types

-The wrap-up. Like the Huffington Post year-end quiz above, this type of quiz asks you to test your knowledge of a certain amount of time.

-The comparison. Like the ISIS or Hamas quiz above. This quiz asks you to choose between two groups. It works well for politics or for foreign affairs that people might not be so familiar with.

-Big issue test. Like the Iran quiz above, this type of quiz takes a very controversial or just outright popular issue and asks you to see how much you really know about it. Whether the quiz taker does well or fails they’ll have something to talk about.

When people share their quiz results on Facebook and Twitter, the title is feature prominently and is the primary reason their friends might click on the quiz and take it. Don’t take the responsibility of writing good quiz titles lightly. here are three titles that consistently perform well for News Quizzes.

-“How much do you really know about?”

-“Which character in the news are you?”

The question part of a quiz is my favorite part personally. In the minute or two that people are answering your quiz questions, you get a chance to speak personally to each and every person who it taking the quiz, an opportunity that is all to rare in content marketing. There are best practices with quiz questions, check them out.

All 100 of the top 100 Interact quizzes have at least one image question like the one you see below. Images make your quiz more game-like and provide an enjoyable experience for people on your site, it just works. 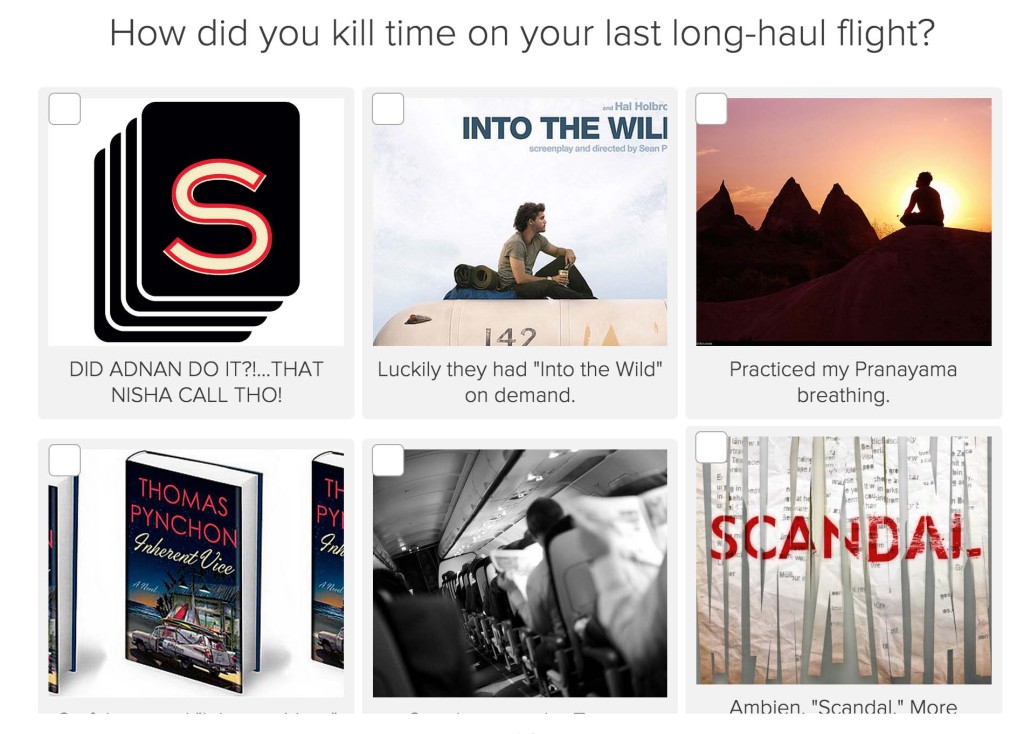 I did a whole massive article on why this works. The short version is that people can identify with you (and your quiz) when it actually sounds like it was written by another human being. Since quizzes are a one-to-one medium instead of a broadcast, talking like you would to another person really makes a difference.

Here’s a secret that’s not at all a secret…the way your quiz will get a lot of traffic is if people share their results. A quiz gets 10x more traffic when it gets picked up and goes viral on social media (as compared to just being another post on a blog).

The default setup for social shares coming from quiz results is “I got (my result title)(title of the quiz itself)” that means your results titles are nearly as important as the title of the quiz itself. There are a few approaches you can take here, ranging from humorous to serious depending on what fits your style best. Whatever you do, stick with it. The Huffington Post example below calls me a “nincompoop” which could be seen as offensive, but it’s not, because the entire quiz has been fun and lighthearted.

Or GIF. The image is important to bring home the idea of what your quiz result is. Also, this image will be shared on social media sites when people put their quiz result on Facebook. 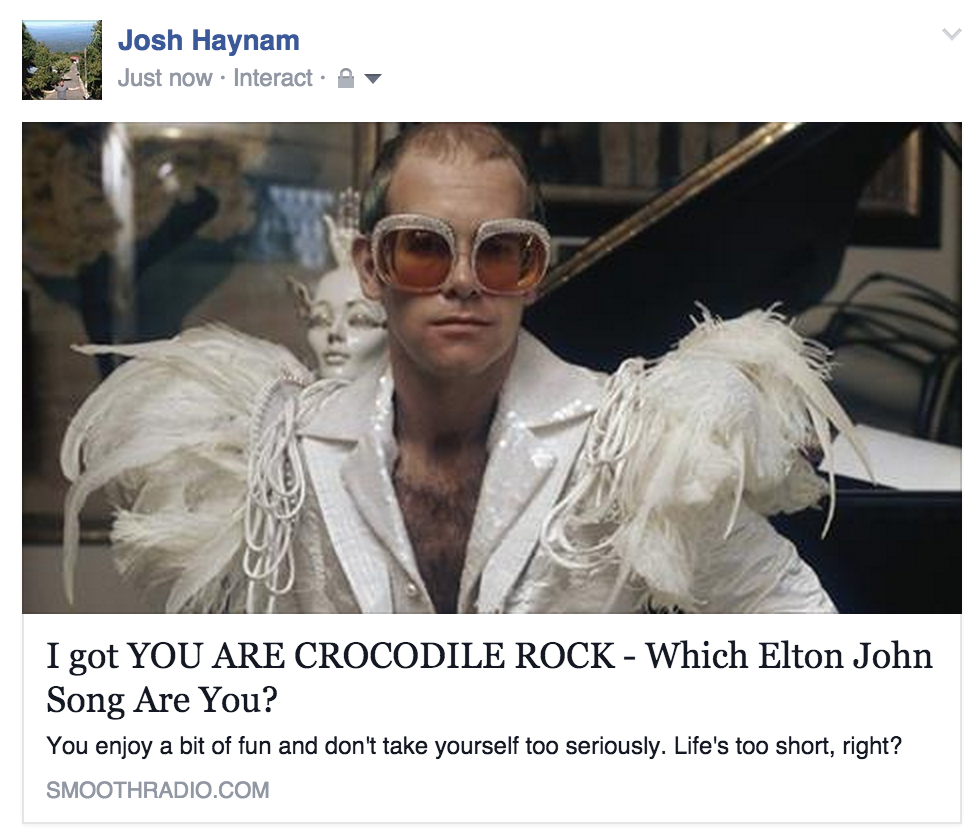 -Flattering description (or not flattering)

So we tend to share good things about ourselves on social sites – why would you tell people about that test you failed or losing your job? Quiz results with positive tones get shared more in general, but the opposite also works when you make a satirically negative quiz. 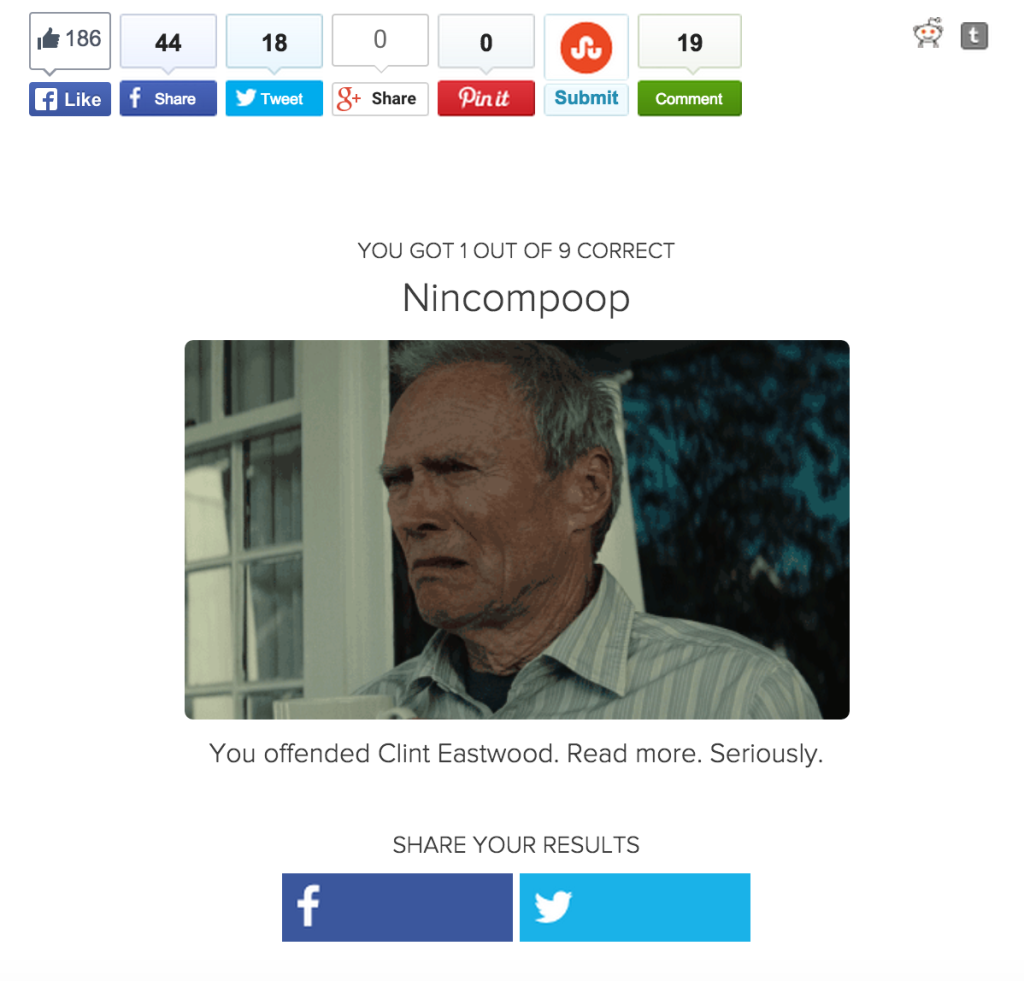