In the late 1930’s Universal Pictures became the first company to offer 24-hour news. At the time everyone thought they were crazy and even Universal struggled to fill in all those hours of the day. Little did they know that in the next century 24-hour news stations would spring up all over the country covering everything from local heroes to global catastrophes. As the world of content evolves, news stations are also transitioning into new-age producers of all things breaking. One trend in particular is the rise of the quiz. In 2013, 8 of the top 10 news pieces were some form of a quiz, and quiz traffic has the ability to eclipse articles because of their share-able nature. As a news site it can be difficult to come up with good topics for your quizzes, so here is some help from our customers.

1. Where in Faquier County do you belong? From local news site Faquier now, a small company in northern Virginia comes this gem of a quiz. It’ s a simple questionnaire but it got people talking. Facebook commments ranged from “I can’t afford to live in North County” to “The quiz got southern Faquier, that’s where I live!” It was an absolute joy to watch the comments roll in as community members from the county gathered around the proverbial water cooler that is Facebook to weigh in on their result (which was the part of the county they should be living in) 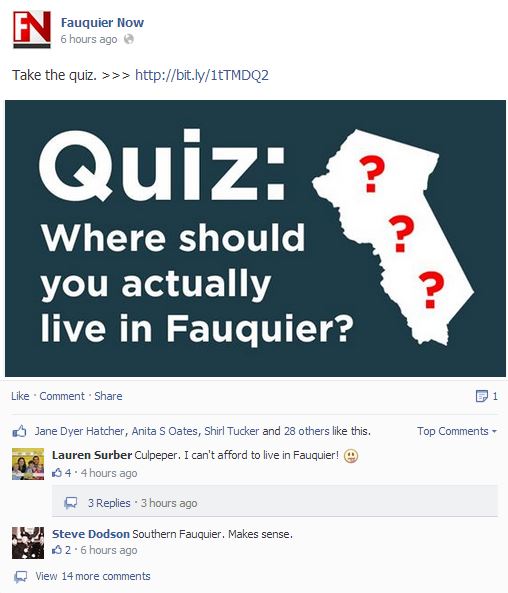 In a county with population of just 60,000, 3000 took the quiz on the first day it was live. It was a smash hit and the top article for the news site two weeks running.

2. Test your Portland IQ. From Portland Monthly Magazine this quiz tests visitors on their Portland Prowess. (if you didn’t know, Portland is proud of their city and how weird it is). Once again, this quiz was the top-performing piece of content on the site for two weeks running and garnered over 1800 social shares. The best part about it is that the quiz was created by an intern who was given the task of coming up with something new. 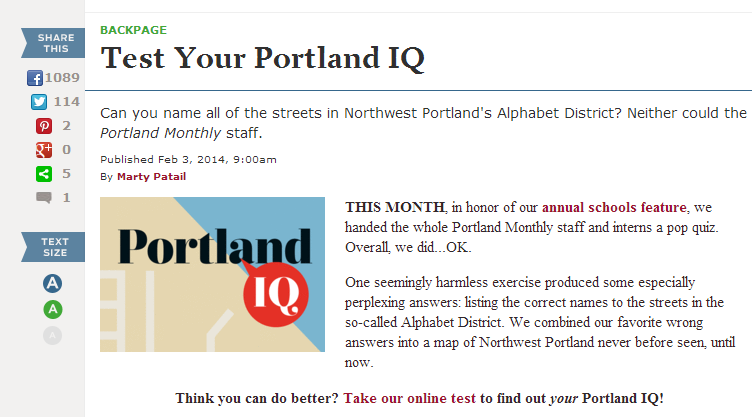 This concept really works for any city, and we’ve already seen it replicated for Vancouver, London, and New York among others. All you have to do is come up with questions about your city’s most famous places and things to do and you’ve got a great quiz that will get shared around the city. 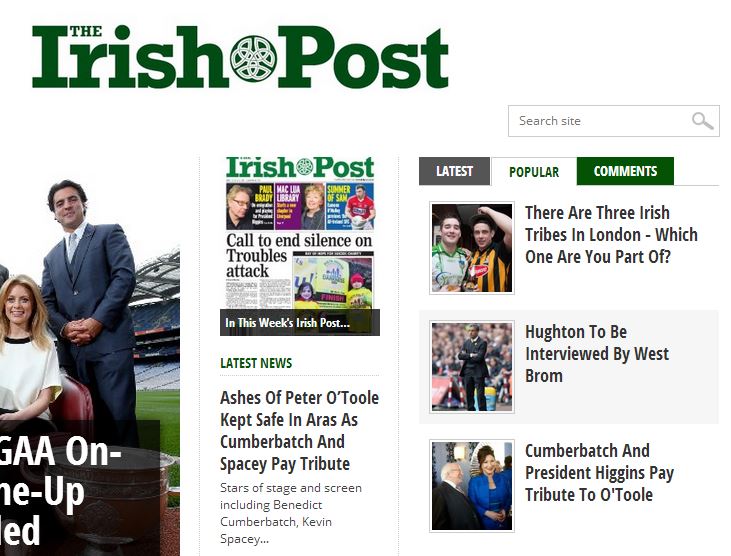 To replicate this one on your news site, find out what kinds of people live in the city or country you focus on. Then create a quiz to determine which kind of person the quiz taker is. It’s simple, it stirs up controversy, and it is great fun.

News will always exist, from the first Universal reel to the latest breaking stories from your hometown and the world, stuff happens that we want to know about. As technology evolves within content marketing, it’s important to stay up to date so you don’t lose eyeballs. That’s where these quiz ideas come in handy.