I absolutely love Disneyland. Since living in the Los Angeles area I’ve had a season pass with them for the past 5 years, and can never say enough great things about the park itself and the unparalleled experience I get every time I step foot onto the magical grounds. For kids and adults alike, Disneyland has everything you could ever want to offer for a vacation or a step away from your normal life. Often times my fiancée and I will go there just for a couple rides and drinks, and it creates the perfect atmosphere for a relaxing evening.

To make a free quiz like the ones talked about in this article, head to tryinteract.com

Upon entering the park, it’s like you’ve entered a whole different controlled universe. With the staff’s attire, characters everywhere, and music accompanying your every step, it really does seem like you’ve been transported into a whole new world. Disney tries very hard to take you out of your universe and into theirs. And let’s be honest, it works. If you somehow find yourself unhappy at Disneyland – well, that’s just impressive.

But what is the one device that we all constantly carry on us that can take us out of this curated world with just the swipe of our finger? Ah yes, the smart phone.

No matter how hard Disney tries, they can’t prevent you from easily whipping that iPhone out in line for Space Mountain to check on your friend’s photos or that recent comment on your instagram, and that is not a good thing. Why? Because you are immediately transported out of their world and back into your own, and that takes away from the experience they are trying to set up at the park.

This has actually become an issue. With distractions in the immersive experience, Disney can no longer keep your head in their perfectly crafted universe. It creates a tension between their world and your own, and that is negative on them. But what’s the solution from their side? It’s not like they can just prevent you from using a cell phone at the park.

Well, what if they created their own mobile experience? If they can’t stop you from using your smart phone, they might as well make it a part of the experience as a whole.

Now you could say that all of this is an interesting examination that I’ve made on what is going on between the mobile and physical Disneyland park experience, but Disney has created something in an attempt to enter into the mobile experience. So what they have done is created a mobile quiz application, called Disney Inquizitive. 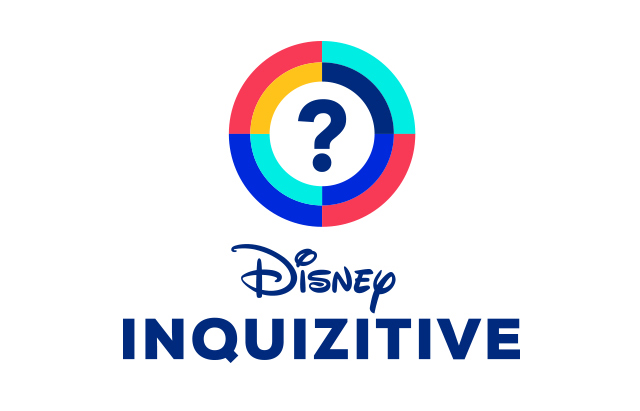 Let’s take a look at the app. It’s very well designed, and as you probably may have guessed, the entire premise of the app is centered around quizzes. Disney has loads of quizzes available for you to take, ranging from ‘Which Disney Dog Are You?’ to ‘Where Should Your Disney Honeymoon Be’ and even includes ‘Which Pretty Little Liar Are You?’ which doesn’t necessarily directly have to do with Disney, but with one of their more mature programs that airs on ABC. 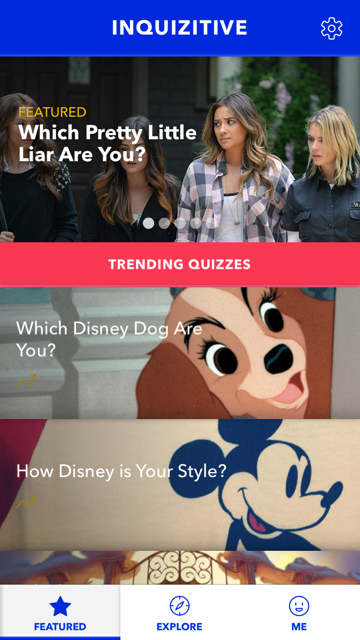 Every single quiz gives you a response based on the questions you answer, and every time you take a quiz Disney records your responses and creates a little character profile for you in your ‘Me’ section. 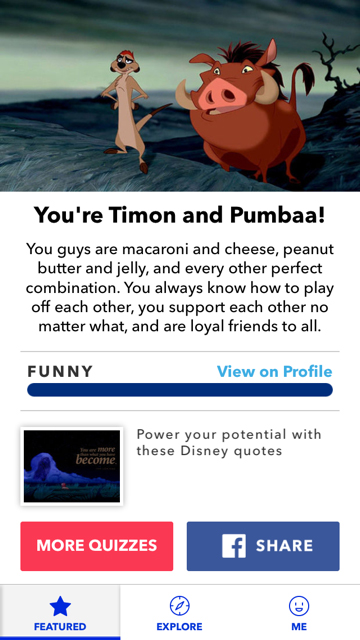 I’m not going to lie, taking the quizzes is pretty fun and they have some great writers working on them, because the subject matter is excellent. While you’re at the park, you really do feel like you’re adding to your Disney experience by using the app. A lot of the questions even directly have to do with the park itself, so sometimes you can’t fully finish a quiz unless you’ve spent time around Disneyland. 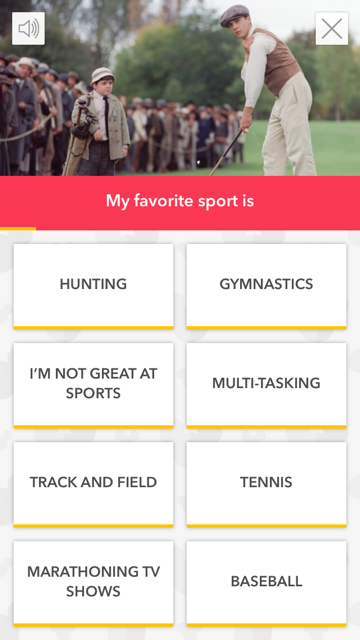 The questions are accompanied by nice images up top, and easy to press large buttons to answer the questions. You get a nice sliding animation to the next quiz question and a colored bar towards the top that let’s you know your progress.

After taking 5 quizzes, it appears that in Disney’s eyes I am officially considered ‘The Wingman.’ Every time you take a quiz, your final result gives you a character or place that relates to the quiz, as well as a character trait. They add these traits together in your profile to give you an ultimate general character that they think you’re most like. I’m flattered, and this result seems quite complimentary towards what they believe my personality is like. 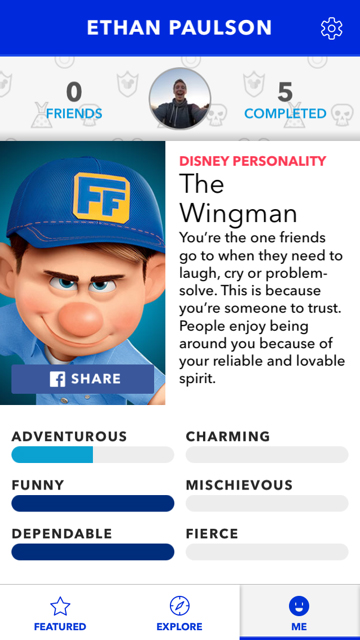 If you become uninterested in the quizzes that are placed on the featured section, you can easily touch the explore tab to take a look of the rest of the quizzes that the app has to offer. They are split into several categories, and you can choose your own direction on what type of quiz you’d like to take. They make sure to have plenty of content available for you to click through and engage in, as well as making sure they are pointing you back to your profile telling you what your Disney personality is.

There is the option to add friends on the app, so you can even keep up with what kind of answers your friends are getting and what results are coming in for them.

So why did Disney choose this as the avenue to increase interaction? There must be plenty of avenues that Disney could potentially stroll down, so why quizzes as the first point of interaction? Well, I believe Disney has seen the success of quizzes as marketing and interaction tools online, and they felt that they could tackle this in the mobile world as well.

If they wanted to start their approach from an already proven model and test the waters, quizzes would be the perfect way to go. We have already seen how much quizzes have affected the social media world, and how their share and completion rates are much higher than one might think. This creates the perfect avenue for Disney to enter this type of media, and have it spread naturally, and quickly.

Disney has been subject to some of the most popular quizzes we’ve seen online, the most common being ‘Which Disney Princess Are You?’ which might be one of the earliest quizzes you remember being on your Facebook feed right when quizzes started to catch on. With an absolute load of content, Disney doesn’t have a tough time coming up with new quizzes across all their different forms of TV shows and movies.

I see this expanding quite a bit, with specific quizzes being reached out to certain audiences, including quizzes that are exclusive to the park, older classics and also brand new shows that are currently on the Disney channel.

Disney is just one of the many companies that are seeing the value in having quizzes as a legitimate avenue to create interaction amongst its users. With the amount of downloads and profiles being made on their Inquizitive app, we can see how it is all paying off. There is much success to be had in this realm of marketing, and who knows where Disney might take things in their mobile experience next.

With their massive brand and wonderful parks, I believe the possibilities are truly endless for them. But for now, knowing that I am an official Disney Wingman brings plenty of happiness to me.

To make a quiz similar to Disney’s Inquizitve App for your website, head to tryinteract.com