I recently returned from a 3-day trip to Yosemite National Park and just had to share a marketing lesson from YosemiteHikes.com which I used to research the different trails. In a post about one particularly perilous hike they had this to say.

Acrophobics Beware:  The top of Clouds Rest is a narrow ridge with a long, sheer dropoff on the north side (the side you can see from the Tioga Road). The dropoff to the south is less extreme, but it wouldn’t require special talent to wind up just as thoroughly and symmetrically dead by falling off that side. It’s best to visit Clouds Rest sober and during dry weather.

That said, the route over the ridge is more manageable and less dangerous than Half Dome’s cable route. If you’re slow and careful, you shouldn’t feel like you’re a freak gust of wind or a momentary lapse of concentration away from the bottom of Tenaya Canyon. And the very top of the peak opens up again to around fifty feet wide, which will feel like the Great Plains after the underpants-imperiling knife edge you’ve just crossed to get there. – YosemiteHikes.com 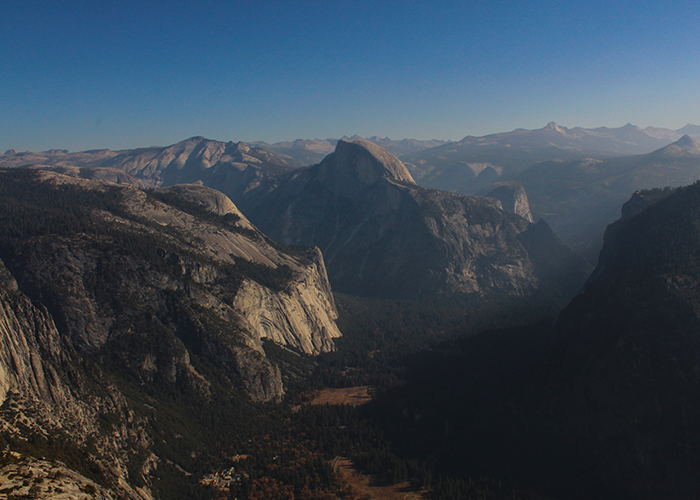 Now the article also included all the technical information you’d need for the trail as well as climate etc. so it was genuinely useful, but I want to focus on the addition of humor to what would otherwise be a purely informative piece.

Why Do We Need Humor in Marketing?

The thing about humor is that it’s memorable. I kept going back to YosemiteHikes.com even though there were plenty of other websites talking about the Yosemite trails because I remembered the humor. That was interesting to me, so I dug into it and found a piece written by Edutopia about education and humor, they had this to say.

Humor activates the brain’s dopamine reward system, stimulating goal-oriented motivation and long-term memory, which means that humor can improve retention in students of all ages. – Edutopia

So much of marketing is about education, whether you’re talking about your products or why people need your products, or how to use your products to achieve some goal that customers have, we’re doing a lot of educating. If humor makes people retain education more then it’s a must-have for marketers.

How Do We Add Humor to Marketing Without Looking Dumb?

I think that’s the real question. Especially if you work in a company that has strict brand guidelines. I can’t tell you how many times people have told me they just want to create marketing “Like The Dollar Shave Club Guy” (who I used to work next to, he wore orange pants to work most days, true story).

The problem with going to an extreme like this is that you already have a brand established, and that brand has a certain reputation, and you must uphold that reputation. You cannot simply “re-write” your brand, that will never fly, and it’s not something to do anyways. However, there are ways you can begin injecting humor into your marketing without totally going overboard, let’s take a look.

Ways To Add Humor Into Your Marketing Without Looking Dumb

The biggest objection to humor in marketing is a degradation of brand integrity that can stem from being goofy or silly or making jokes while talking about serious topics.

So often marketing becomes a “performance” by the time everything goes through approvals and everyone weighs in on it you’re left with something so dry that not even you want to read what you just wrote. One of the easiest ways to break up a monotonous piece of marketing is by breaking the fourth wall and drawing outside the lines. Let’s quickly define the fourth wall according to Wikipedia.

“Breaking the fourth wall” is any instance in which this performance convention, having been adopted more generally in the drama, is violated. This can be done through either directly referencing the audience, the play as a play, or the characters’ fictionality. The temporary suspension of the convention in this way draws attention to its use in the rest of the performance. – Wikipedia (which is now a reputable source) 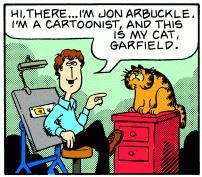 This Garfield example shows what I mean by breaking the fourth wall. Jon is now talking to us directly from inside the cartoon instead of acting like he normally does. My favorite ways to break script like this are as follows.

You know how sports games have a play-by-play announcer and a “commentary” announcer? (My favorite being Bill Walton, he never talks about sports, watch the clip below for reference).

He’s nuts, but so much fun to listen to.  I actually watched this entire game because of Bill Walton, and I’m not a fan of either team.

Whether or not you like sports I think we can agree that if you can get people to watch a game that they don’t care about just because the announcer is funny then you’re doing something right.

Now there are rules to providing funny commentary. It always has to begin with the topic at hand, you can’t just go talking about a funny story from the grocery store yesterday if you’re talking about how to brew coffee, unless there’s a connection. If you watch the YouTube video of Bill Walton above he goes on a rant about how Shane Battier should be president of the United States and how great of a person Shane is, which has nothing to do with the game except that Shane won a national championship while at Duke and Bill Walton is commentating a college basketball game so it’s connected to what’s going on.

The top of Clouds Rest is a narrow ridge with a long, sheer dropoff on the north side (the side you can see from the Tioga Road). The dropoff to the south is less extreme, but it wouldn’t require special talent to wind up just as thoroughly and symmetrically dead by falling off that side. It’s best to visit Clouds Rest sober and during dry weather.

They make a comment about hiking Clouds Rest whilst sober which is hilarious because it’s a 14-mile hike so of course you’d have to be sober, but it’s a funny comment because it’s ridiculous and in context.

3. Illustrate or use pictures that provide explanation in a funny way

Take a look at the header picture below for this article about business growth. 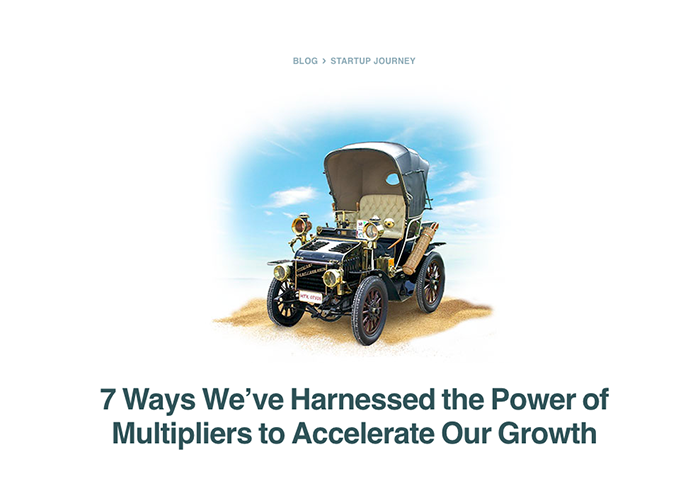 It’s from this article  by Alex Turnbull at GrooveHQ, which has one of the best content marketing machines I’ve ever seen. It’s ever-so-subtly funny because it uses the word “Harness” which is for horses, and talks about “Accelerate” while showing a super early-model car, so the idea is that your going from horse-powered to actual-powered cars in your business. (Sorry if that’s lost on you, I geek out on cars and words).

Using pictures or illustrations that have subtle humor is probably the easiest way to begin with adding some humor into your marketing because you can make it so subtle that you won’t have any difficulty getting approval to do it.

Now I do have to say that I’m not a fan of using silly Gifs in your articles just to make a point, those are distracting and if you use enough cat Gifs people will start to not take you seriously. Save those for your internal communications.

“Jeff ran up to me saying he had a brilliant idea, which may very well have been true, but I hadn’t had my coffee yet so at that point you could have told me you figured out how to live forever and I wouldn’t have cared”

Think about it and you’ve probably heard speakers or writers talk about the difference between “pre-coffee” and “post-coffee” and that’s because nearly everyone can relate to a story about before you’ve had coffee in the morning and it’s funny because it’s so true.

One of the most important comedic elements is reliability. I realized this watching an episode of “Hot Ones” a show where celebrities eat hot wings while doing an interview. In the episode, Lilly Singh, a YouTube personality with 14 million subscribers was talking about how she keeps making videos that are relatable, and her process for doing so. It clicked for me because she was speaking about understanding her audience and the types of things they do in real life, not her glamorous YouTube life.

For example, a video about the troubles of grocery shopping is relatable and will do well and be funny, but a video about the perils of meeting Dwayne “The Rock” Johnson and Kevin Hart in Hawaii won’t do so well because no normal person has that story. 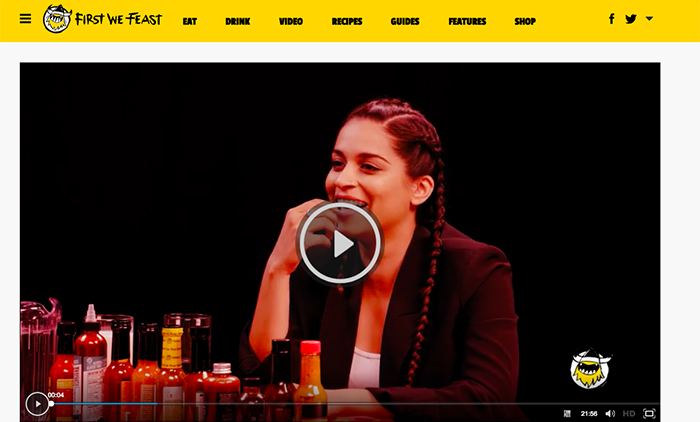 Telling funny stories throughout your marketing that everyone can relate to is an incredible way to make your marketing memorable and enjoyable at the same time.

“Funny” Brands to Learn from

It’s always helpful to get some practical guidance on how you can actually begin implementing humor, and in order to do that you’ve got to see it being done. These are a few brands that have done it well and are succeeding in putting humor into their marketing without messing up their reputations.

Check out their list of hikes and read through a few of them for inspiration on how to incorporate humor into guides on hiking, which isn’t necessarily the funniest of topics.

The email marketing company actually created a guide on how to “Make Em’ LOL” in blog posts which is even harder to do than just be funny, they broke it down into how to be funny for everyone in their company to follow and for the world to see. Check out the guide for how they recommend being funny.

They worked with Marketoonist to make a bunch of lead generation jokes, which are only funny if you’ve ever worked on lead generation, but if you have then they’re quite hilarious. Humor that only makes sense to your target customers is actually the best kind of humor because it works to attract the right people and is uninteresting to the wrong people.

Humor is memorable, and if you want your brand to stand out and become the website that people keep going back to for information and then for buying products, then using humor is a great way to be different. Whether you’re commentating, telling funny stories, or simply adding some imagery that has a hint of humor, you can make yourself the go-to brand for your customers by being just a bit funny.

It’s also way more enjoyable to create humorous content, so you’ll find yourself drawn into creating more content, which as we all know is one of the key factors in marketing success, just showing up.

I encourage you to try incorporating some humor right away, start with the least difficult options, add some imagery or start adding some commentary on your content, see what kind of an impact it has on building relationships with clients and go from there.