Perception is more like an on/off switch than a sliding scale. When something is perceived as negative, the switch is in the off position because a trigger put it there. The only way to move that switch to positive is through changing your approach. For example, there was a salesman who had been trying for ten years to sell a piece of software to a banker who just wouldn’t budge. Every few months the salesman would come back touting the latest features the software had added, and every time the banker would listen intently but politely decline.

One day the salesman came back and tried a completely different approach. Instead of talking about the new features the product had he began asking the banker about what new problems he was experiencing. This meeting lasted much longer than usual, and after ten years of trying the salesman finally walked out with a signed contract.

This story is a perfect example of a change in perception. When the new approach was used, the banker saw the product in a completely different light and pulled the trigger to buy it.

With lead generation, the old perception is something like this. We will entice you to give up your information by telling you anything we have to. Then, we will constantly nag you with our product offers and up-sells until you give in and make a purchase or get fed up and opt-out.

The calls-to-action that are often in place promise updates and exlusive content “get our newletter” “download an exclusive ebook” “get on the insider list” These are vague and often ambiguous calls to action that are perceived as generic ways to get an email address so the business can try to make a sale.

To avoid being perceived in the same way as traditional lead generation, one must completely differentiate their offers to appear nothing like the old school ones.

The person who I’ve seen pull this off the most spectacularly was a car salesman by the name of Robert. Robert had a great personality and could hit it off with just about anyone, but that’s standard practice among salesmen. What made Robert unique was the way he handled his leads. Robert would ask for a mailing address from every prospective customer along with their birthday. He would ask each customer if he could send them a birthday card, and no one said no. Robert would send a birthday card to every potential customer religiously, until he was sending out multiple cards every day.

The result was that when Robert’s prospects needed to make a car purchase, he was always the first one they thought of because he sent them nice birthday cards every year.

What Robert was doing was nothing less than lead generation and a drip campaign, but the way he conducted himself was so different from what other car salesmen do that his customers never even thought to associate his practice with ‘lead generation.’

Now we don’t all sell cars and the practice of sending birthday cards has gotten so over-used that it now fits in with traditional lead generation, but the principle Robert discovered is simple. Have a reason for asking for information, don’t just blindly collect leads.

To exemplify how to properly ask for a lead in context I’d like to tell you a story about my favorite coffee shop in the world. It’s a small shop in Portland run by a girl named Ashley. I first came across Ashley’s shop on a morning walk. As I passed by the shop, it smelled delicious and I couldn’t resist checking it out. When I walked in Ashley started a conversation with me about where I was from (I must have looked lost) and what my interests were. After a few minutes Ashley excused herself and went to the back of the shop.

She returned with various coffee samples that she picked out based off of our short conversation. To my surprise her analysis was spot on and I loved all of them. I decided to buy one. On my way out Ashley asked for my email address so she could send me more personalized products.

Every month I get an email from Ashley’s shop with some personalized picks, and nearly every month I order more coffee.

Ashley has mastered the art of asking for information in context. I know exactly why I’m giving up my email address and when I receive her emails they are expected and welcomed.

So far we’ve only talked about real life examples of lead generation, but there is a way to translate what Robert and Ashley did into an online environment. In both cases, the salespeople had given a sort of assessment to the prospect before asking for information. In Robert’s case he had a conversation with the customer about their interest in cars, and in Ashley’s case she had asked me about my life and travels.

By replicating the kind of assessments Robert and Ashley give to their potential customers, it’s possible to position your lead generation to be very relevant. For example, if you run an online coffee shop, you can create your own coffee taste profile quiz and ask for a lead at the end of it so you can send personalized product ideas in the future. 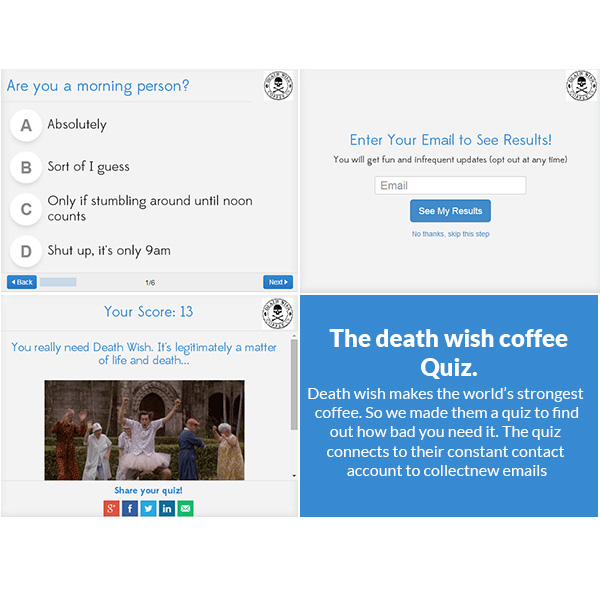 Of course I would want personalized coffee suggestions, and even if I don’t, thanks for asking! When I’m prompted to input my email address so you can send me personalized information about something I’m interested in (I.E. Coffee) I don’t feel like I’m a new lead for your business – my perception doesn’t jump to lead generation.

Lead generation has gotten a reputation for being shady because of its lack of personalization. We ‘spray and pray’ which leaves the majority of people feeling slighted. Replacing the spray and pray method with a more personal, targeted method flips the switch to on and changes the perception of lead generation to positive (or at least not negative).