I’ve tried outbound twice. The first time was through email and the second by cold calling. Both failed pretty badly, the only thing that’s worked for me is inbound, and I’d like to tell my story. 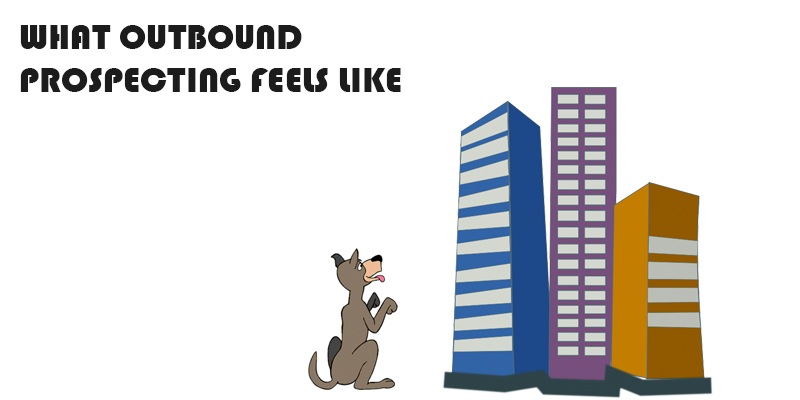 A problem with Outbound: The amount of work

My first attempt was by targeted email outreach, which I’ve outlined in detail here. It was tedious. I sent 1,200+ outreach emails, and every single one was somewhat personalized to the recipient. The response rate was decent, but then it took an average of 30 emails back and forth to get someone set up with Interact (For FREE!).

That was an insane amount of work, and out of the 100 people who I personally helped get set up with quizzes, only 1 went on to upgrade and pay after we released a full-featured, paid version of our tool. 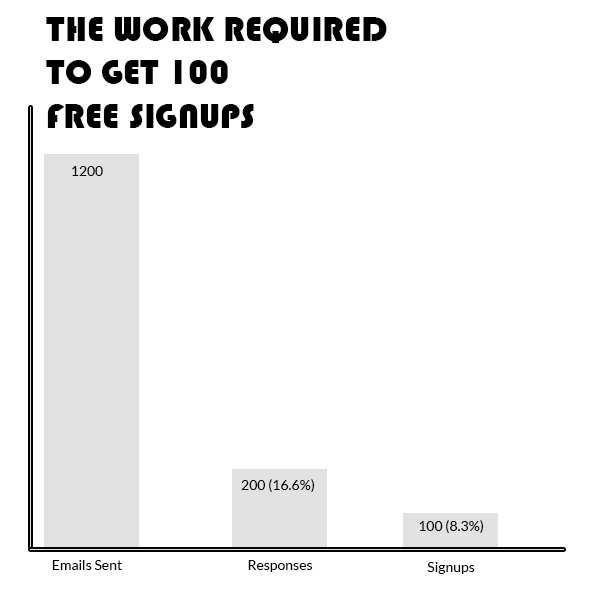 Every time I’ve tried outbound, I end up with a shit-ton of conversations like the one below. They end up like this

I’m not claiming to be an expert outbound salesperson, so it’s completely possible to avoid issues like this, but it’s happened time and again.

When I did a cold calling experiment, I brought in a seasoned rep from a large tech company to hammer the phones. He did 200+ calls in a week, and ended up with the exact same types of questions. It’s like starting a race from behind, which sucks. 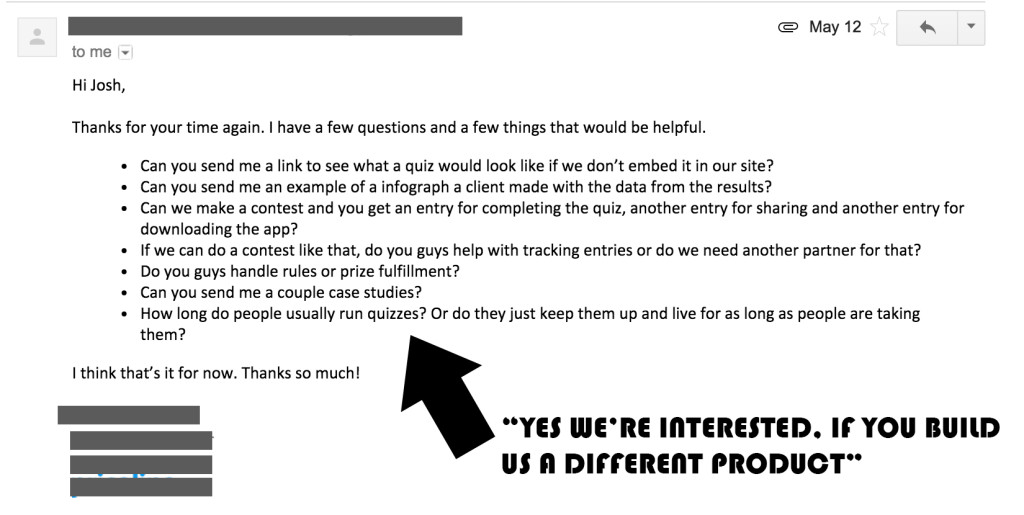 In contrast to the email above, inbound marketing is like a water cooler conversation. One person coming with an interesting topic, presenting it in a non-threatening way, and then letting the other person decide whether they want to do anything with that information. No one gets hurt. 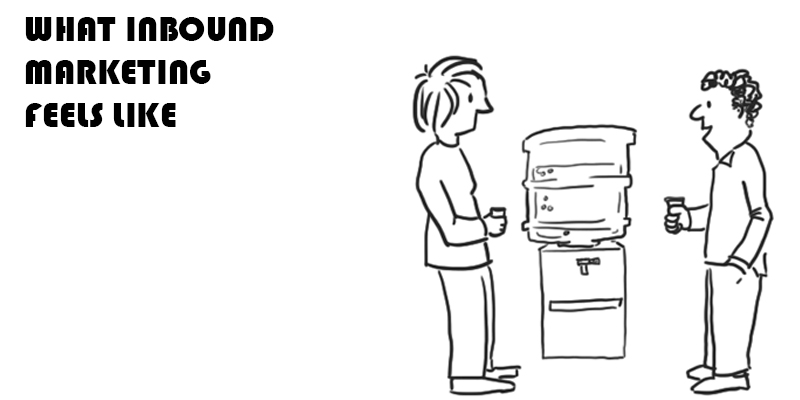 It’s good for everyone

Dharmesh Shah said something onstage recently that resonated with me.

“Market to others as you would want others to market to you.”

The reason this struck a chord is because I’m on some crazy calling list for some cosmetics product that I have no interest in. These people call me at least once a week and always start with the same line “Hello, is this Mr. Josh Haynam?” It irritates the shit out of me, and is exactly how I do not want to be marketed to. I’m sure you all have a similar story.

On the other hand, I do my fair share of internet reading, and if/when I come across some interesting skin care product (like a beard cream), I may just make a purchase, or make a purchase when I’m in a store later on. I don’t really care of the article was written by the company making products, entertainment is entertainment.

Inbound marketing that drives real business for brands is good for everyone because it provides educational and entertainment value to the customer while also boosting the bottom line for the company. 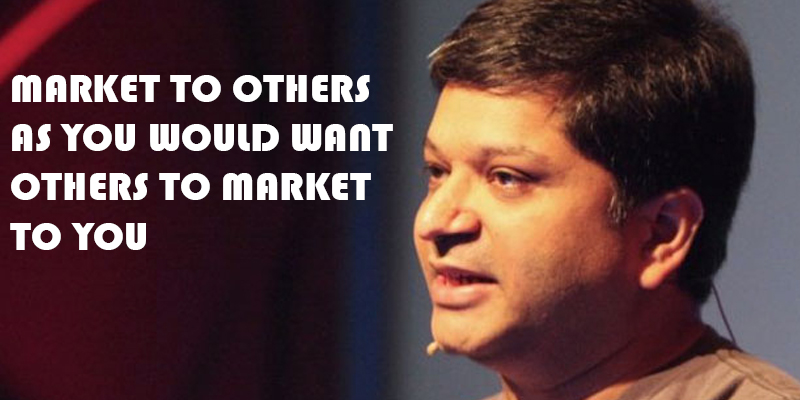 And it’s getting too big to ignore

When inbound started there were lots of stories about successes. Then came stats to back up the successes (granted, most of which come from companies that offer inbound marketing software and services). While everyone’s experience is different, I think it’s getting more and more commonplace that companies are actually succeeding using content marketing.

I came across a webinar the other day with Aaron Ross as the featured guest. It is a webinar about inbound marketing. That might not seem weird, unless you know who Aaron Ross is, then you’ll be very surprised. Aaron is the author of Predictable Revenue, which is the “Bible” of outbound marketing, following the exact method used by Salesforce to create one of the largest SAAS companies in the world.

Now he’s doing a webinar on inbound marketing… that’s anecdotal for sure, but is a sign of the changing times. Inbound is the new cool kid on the block that’s actually an old kid, but is cool now. 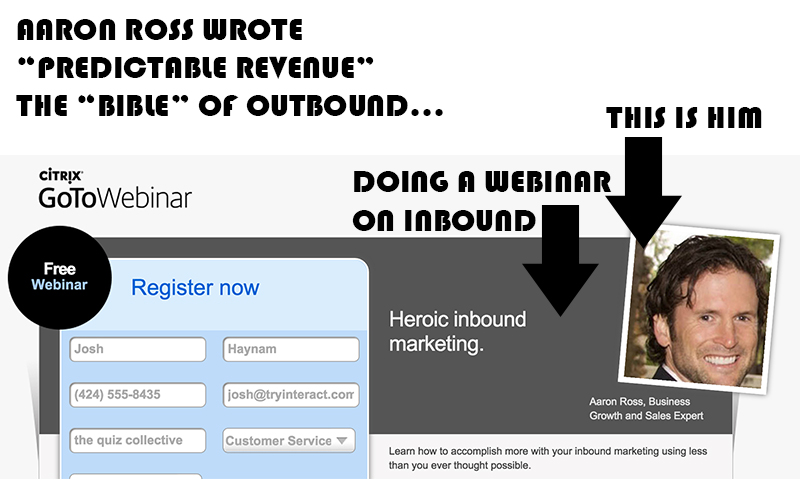 Create a Quiz for Free