In high school I bought and sold laptops for a “living” (with almost no expenses and $1,000 a week in income I thought I was rolling in it). The way it worked was that I would find people who had just bought a new laptop and wanted to get rid of the old one and also make a few bucks. I would purchase these laptops for $100-$200, fix them up and re-sell for $400-$600. It was an excellent gig.

The way I would find new people to purchase from was through Craigslist, by posting in the computers section that I was looking for used laptops. This experience with Craigslist was where I first learned about the power of consistency. If I posted a new ad every single night after school I’d receive 1-2 new leads each day. If I stopped for a little while that would slowly drop to 1 a day, and then one every other day. When things were going well with the business I would get lazy and stop posting, and since the leads only stopped rolling in slowly I wouldn’t notice, until the deals stopped flowing.

Then I would freak out and start posting every day again, but like any sales process, there was a cycle that took 1-2 weeks to close for each deal. It was like the old frog in a boiling pot analogy (sorry, I grew up in the sticks). I would not notice the leads slowly decreasing until it was too late.

You’d think that because this story sticks out so clearly in my mind I’d never repeat the same mistake. Alas, history tends to repeat itself, and 7 years after my laptop marketing experience I ended up repeating myself with Interact’s marketing strategy. I’ve always been partial to content marketing, and I used a strategy called “boring content” to build up Interact’s inbound leads – and it worked. We were getting 900+ signups per month on the product.

Only problem was I wasn’t doing sales, so the conversions on those signups were low.

Taking advice from advisors I dove into sales, reading 25 books and watching 100’s of hours of tutorials over three months. That meant I stepped away from content marketing to focus on sales (I tend to only focus on one thing at a time). The month after I stopped creating content we still got 800-something trials, then it was 700-something, then 600-something. It was the same situation, the ramifications weren’t immediate, but they were pretty rough. (luckily my sales bet paid off and revenue increased enough to hire a full-time marketing person who is now crushing it.

However, it’s the same story, re-building that base of leads will take time.

Why am I telling these stories?

Because they both illustrate the power of consistency in content marketing. In both cases, it took a while (over a year) to build up a real base of leads coming in from inbound strategies. In both cases I stopped being consistent for one reason or another, and in both cases I didn’t realize that I was bleeding leads until it really hurt.

It really sucks to have to battle back after slipping up on lead generation, but it’s also amazing to have a strong flow of new prospects coming in without having to hustle every single day to find new people.

It takes a long time to get inbound going, but it also takes a long time to get outbound really going. I was watching a sales chat hosted by SAASTR the other day and they were talking about investing in outbound for the long term. Only thing that sucks with outbound is that you have to constantly hunt for new leads, even after you scale it up. With inbound you obviously can’t stop, but you also have an established base.

To illustrate the power of consistency, I’ve added a graphic of every Interact blog post over time. Most posts don’t get a ton of traffic, but they also get very consistent traffic. That’s because my strategy has been to answer real questions with content, and that leads to a very steady inbound interest over time. 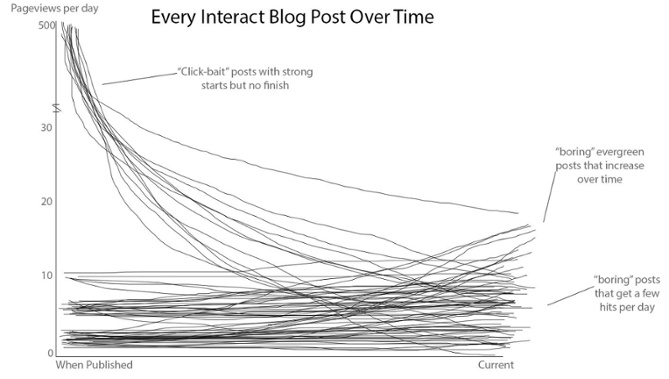 But it does take a while for content marketing to make a difference. At Interact it took about a year, and in the example below, from Everywherist, it took 2.5 years! There are a variety of reasons for this time, including but not limited to: getting better at writing, building more links, having a more established domain, etc.

In both the illustration of the Interact blog and the Everywherist diagram below, a lot of the posts get very steady traffic over time because they are evergreen in subject. This is awesome, but it also usually means that it’s going to take a while for your base of content to build up to a point where you’re seeing real amounts of traffic.

Consistency is the key to a lot of things, it takes 10,000 hours to become an expert at anything, which breaks down to 8 hours per day for 3.5 years. Content is no different, you have to stay consistent. That does not mean, however, that you should stop learning and getting better, which I’ll write about next time.

Create a Quiz for Your Business