I put Forbes #1 because they exemplify everything that can go right with quizzes. Although they’ve only done one so far (and will hopefully increase that number this year), the quiz has done extremely well on social media. It’s a college quiz, which is a somewhat evergreen topic, meaning that this quiz actually gets more views each week now than it did three months ago (averaging about 3,000 new views each week).

What’s even better about this quiz is that is uses its interactivity to personalize Forbes content. Each different college match links out to a specific tool on the Forbes site so every person who takes and shares this quiz brings in more people who spend an average of three minutes taking the quiz and even longer checking out the recommended links from the results of the quiz.

One of the top publishers in the world, Simon and Schuster uses quizzes to promote book releases on social sites. For me it was one of those moments where something you know about and enjoy (in this case the movie “Jobs”), comes up at work and it’s really cool. I like that Simon & Schuster took an innovative approach to marketing their books. They aren’t a young company and could have easily just stuck to traditional marketing avenues, but they took a step towards the future with these quizzes.

What they did has been replicated many times over with success every single time. It’s the “Which (blank) are you?” quiz format that realistically accounts for over half of all quiz traffic. For publishers of books, movies, TV shows, and really any content that has characters, this format is a go-to strategy. 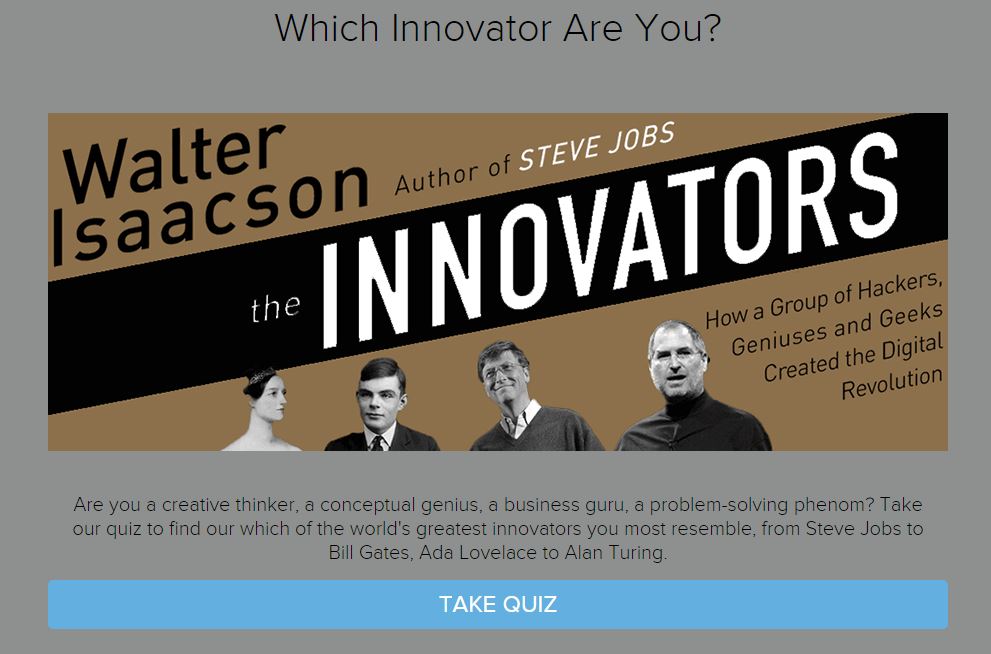 Travel is a large segment for quizzes because both things are so visual. Afar is one of the top brands using Interact to build interactivity into their guides. Every year they do a list of the top places to go in the following year, and this time they included a quiz that helps you decide which location you should go to. It was quite popular with the social channels and people enjoyed commenting on how they felt about the recommended places.

Afar teaches us a good lesson, which is that quizzes and lists go hand in hand, you can use a quiz to turn a list into an interactive piece and increase sharing by personalizing the items on a list. 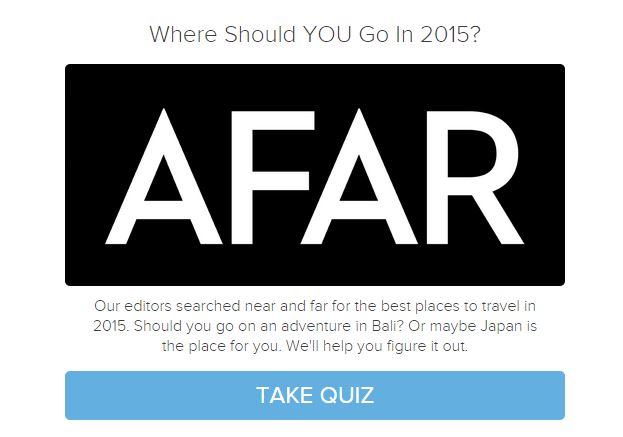 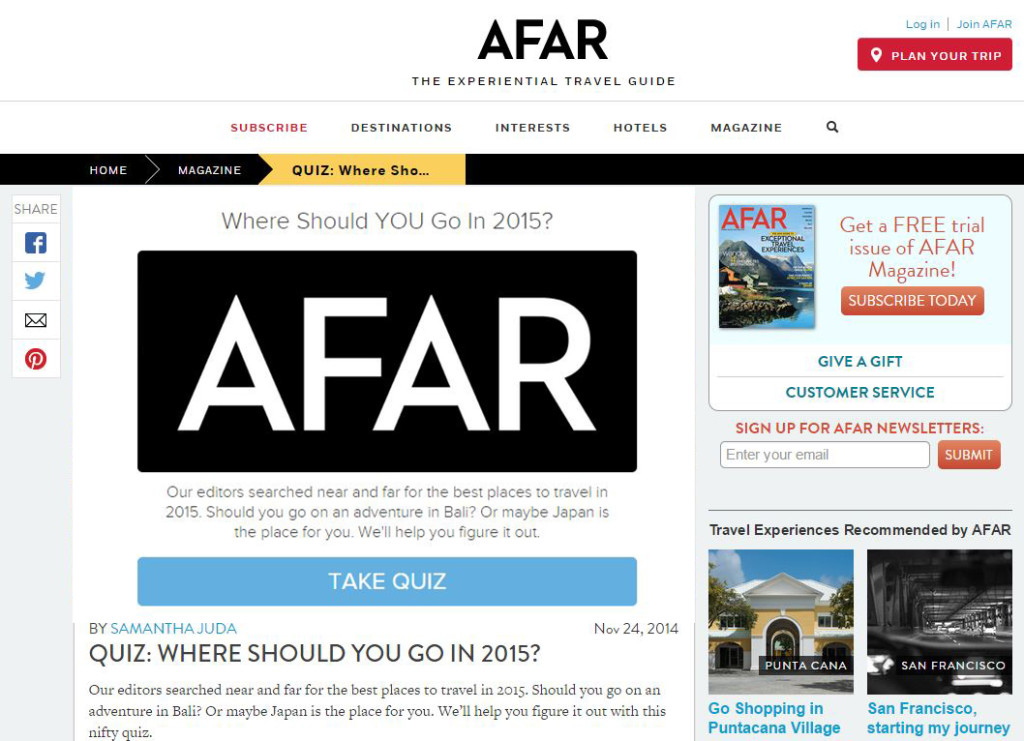 Food52 creates a quiz every couple of weeks, and every single on takes over Twitter and Facebook for a couple of days. They’ve come up with a system for creating quizzes where they do 5-6 questions and then tell you what kind of food or drink you are. These quizzes link out to recipe posts on the main Food52 blog, effectively driving social share traffic back to the main site where the sales cycle can start (Food52 sells advertising and physical products). 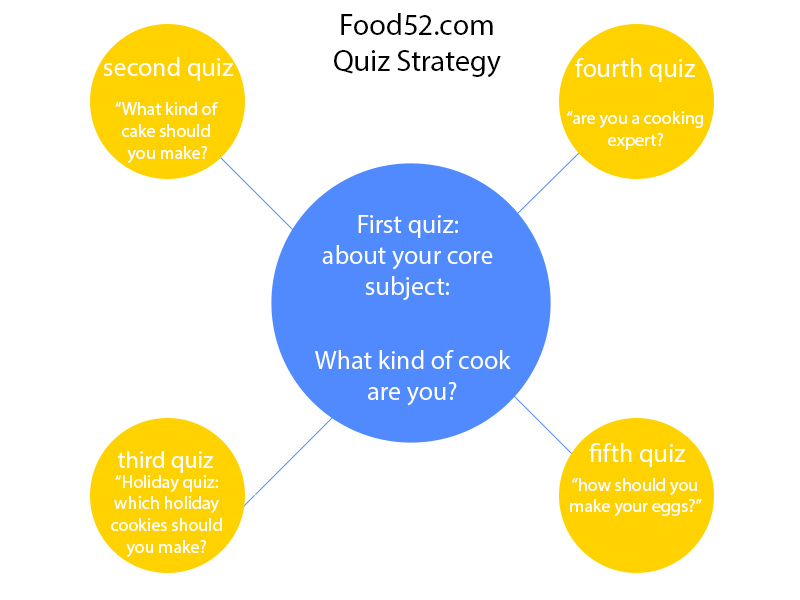 This one is slightly scary, hopefully not that many people really know about a machine gun in detail. All the same, it’s a smart way for Guns & Ammo to re-purpose their content about this rifle into a quiz that’s share-worthy and drives social engagement. This is a good example that you can quite literally make a quiz about anything, and you shouldn’t be afraid to try. 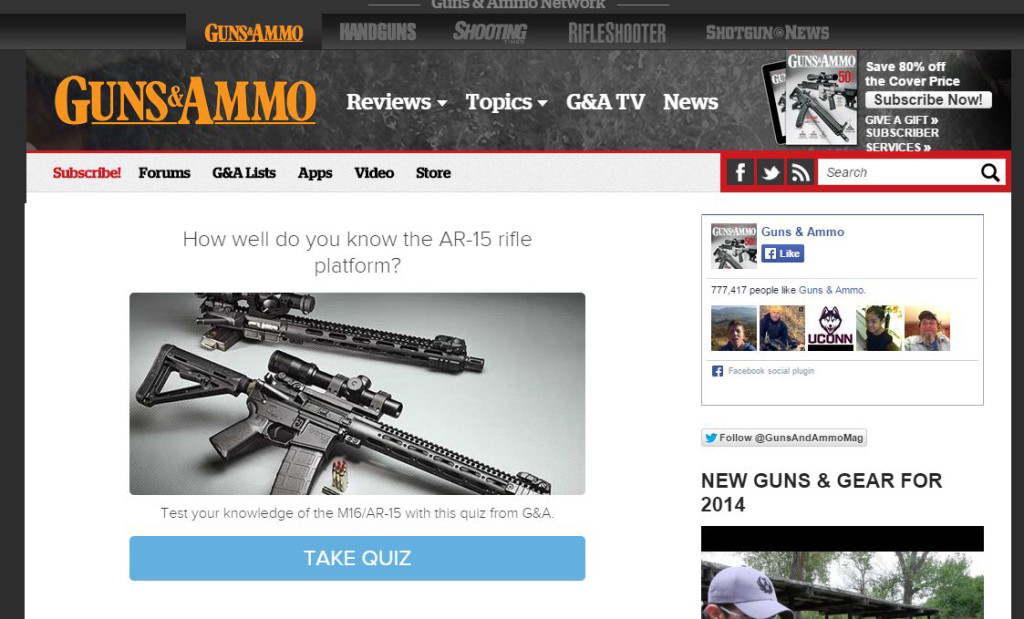 I won’t forget this quiz because it broke our server for just a split second when nearly 5,000 people bombarded the quiz at the same instant. Both our team and Studio C were a bit surprised by this result (in a good way), and they have since followed up by creating more quizzes about the show.

The principle I took away from this one is that audiences want to be involved. Studio C has one of the most involved followings I’ve ever seen anywhere, and those people were itching to get involved in some way. This quiz gave that audience a chance to step into the limelight and share which character they are, engaging in comment wars and discussions that went on for a hilariously long time. 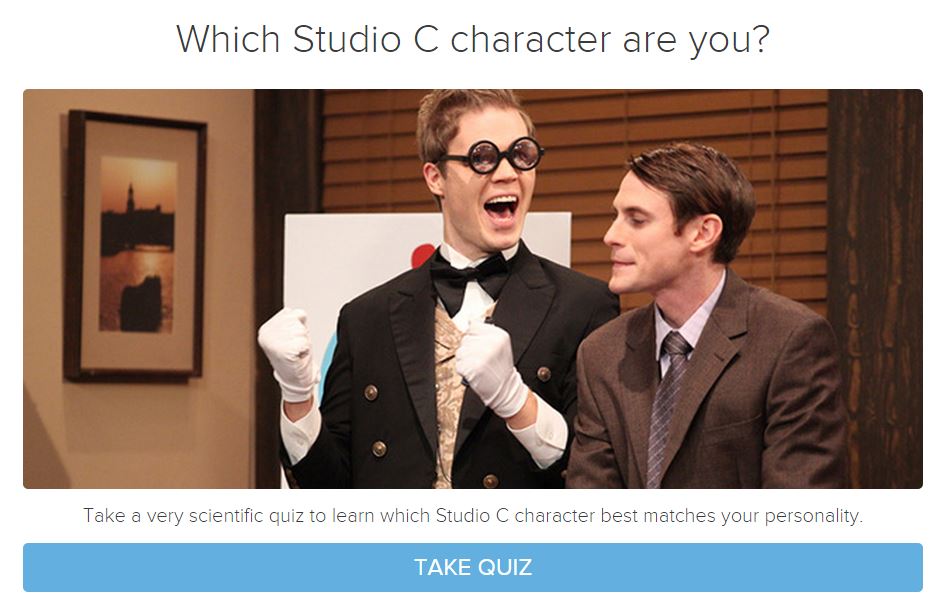 National Public Radio is not primarily known for their innovation in technology. However, that began to change in 2014 with the release of a series of fun and interactive quizzes ranging from accents to which pizza place you should frequent. The thing about NPR is that they have local branches all over the U.S. so the one in Seattle did the Northwest accent and the one in L.A. did a “Which burrito should you get?” that helps you find a local Mexican food spot. 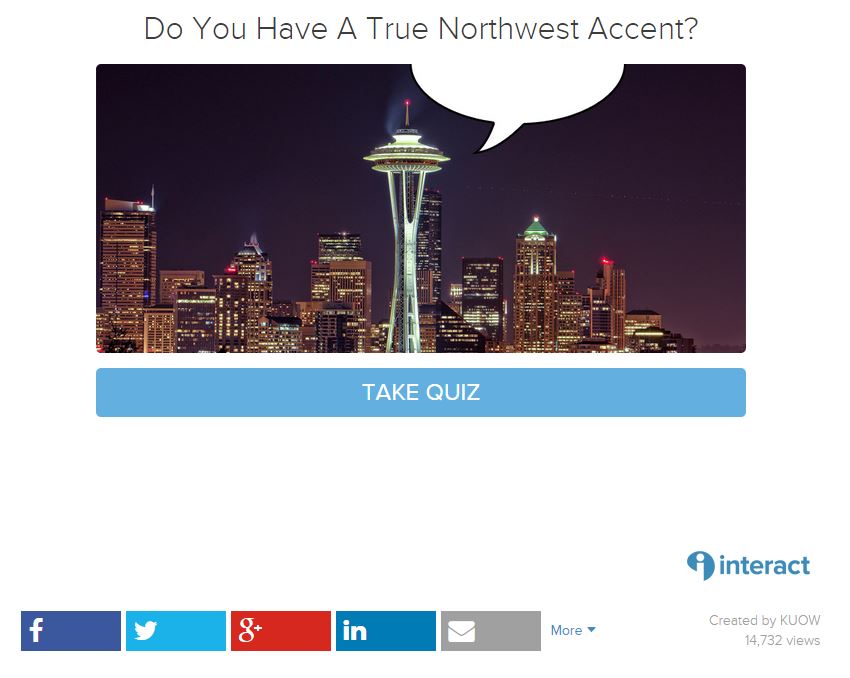 Every time I see a new quiz from The Kansas City Public Library I get happy inside. They have totally re-invented my (and many others’) perception of what a public library is by using fun quizzes. They’ve run nine of them so far, creating a new one every month or so and featuring many of the quizzes on their own home page. The library is a perfect example of how quizzes can be used to dig up popular but obscure content from your repertoire. Most of the quizzes on the Kansas City site use personality assessment to recommend books that fit your interests. 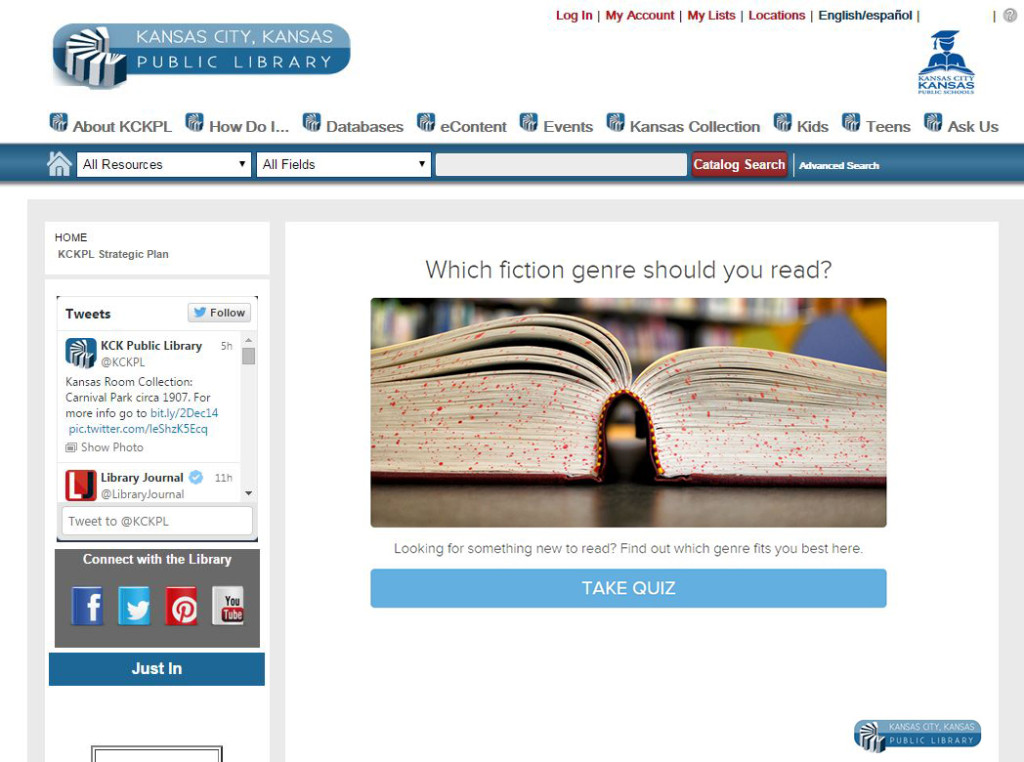 One of the best surprises we encountered this year was this year-end wrap up from The Huffington Post. They launched the quiz a few days before the end of the year and racked up 22,000 views before 2015 began. I like this example because it didn’t take any extra work beyond just looking up the top stories of the year and creating a few questions about them. 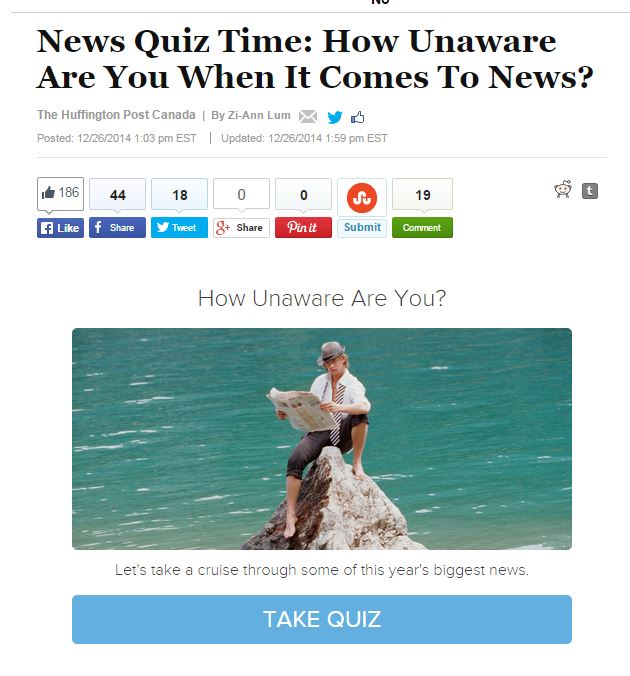 I put Xfm in the publisher category because although they are an audio publisher, they still have a lot of the responsibilities of a traditional publisher (consistently pushing the envelope while producing excellent quality pieces). They do trivia quizzes that are similar format to the all-popular pub quiz, utilizing their on-air content to produce web content they know will be popular before they ever produce it. 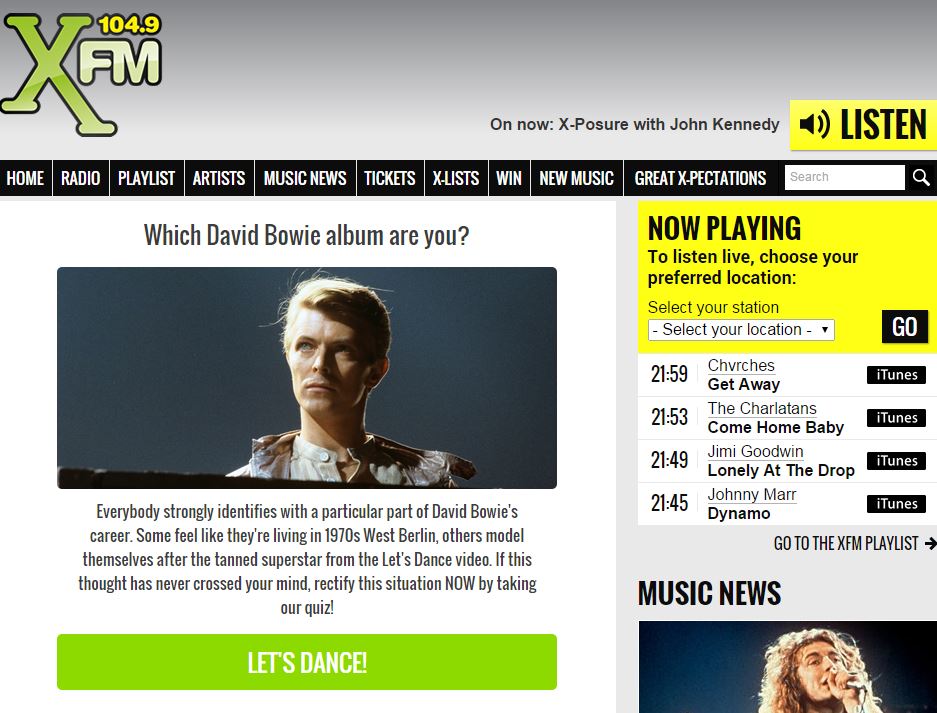 Publishers have a tough job. Constantly producing excellent content is hard work, and can be a thankless job when things don’t take off the way you want them to. Quizzes are one added element you can put in your arsenal to target new (or existing) audiences and engage them in a more personal way. That’s our advice, now it’s your turn to give it a try and create a quiz, click the link below to get started.