2014 was ridiculous for Interact, from the first quiz being built in April to seeing more than 1 million quiz views in November, it was a wild ride. We are extraordinarily grateful to the great businesses who used our service to build amazing content, and I wish I could list every single one, but I’m limited to the top ten.

I’ve chosen the top ten based on overall views, which I think is a vanity metric that’s pretty meaningless. However, I’m proud to say that each of these quizzes did an excellent job of using well-placed calls to action to create tremendous value.

Let’s take a look at how these quizzes combined for more than 1 million total views. 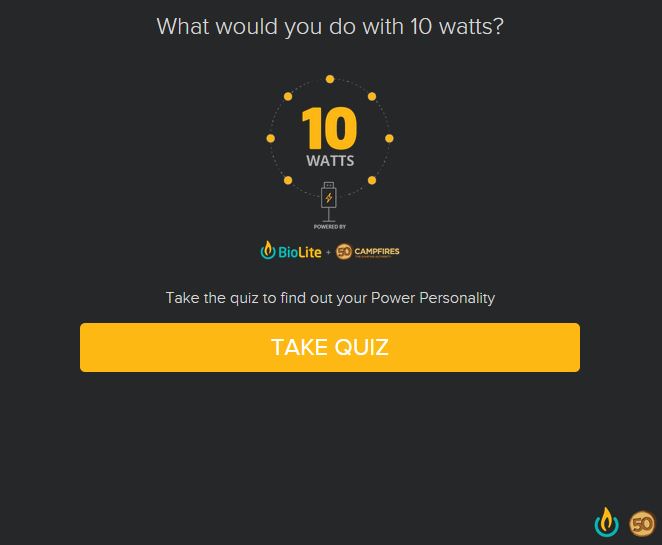 There were a lot of quizzes in this range of views, but I chose this one because it’s both an E-commerce quiz and a lead generation quiz. Also they make an excellent product. Biolite is a camp stove that turns kinetic (heat) energy into electricity so you can charge devices like flashlights while out in the wilderness. It’s pretty darn cool.

They made a quiz “What would you do with ten watts?” that does two things.

1. Collect email subscribers. Given that Biolite is one of those products where you would pick one up for an outdoorsy friend at the last minute for a birthday or Christmas, it’s quite useful to have a strong email list you can remind about Biolite at key times. This quiz uses the Interact lead generation feature to collect

2. Have a good follow-up. Think with me for a second. When someone finishes your quiz they are pretty curious. You’ve just given an assessment on their life based on some rather personal questions. This is a tender moment, and as the quiz taker I’m very curious to know more about this judgment on my life. Okay, back to reality – what I’m really saying is that you should include follow-up links in your quiz results. Biolite does this well by recommending products to people based on which result of the quiz they are shown. 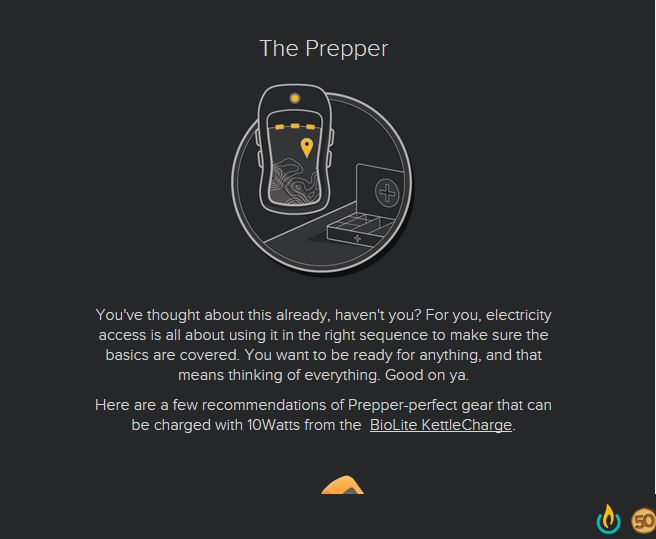 My coworker Matt never cares about big name customers. I’ll be like “hey Matt, The United Nations just signed up” and he’ll be like cool. However, when I told him that Rachael Ray had made a quiz, it was a different story, there was much yelling and running around the room involved. That’s the power Rachael has, everyone from a tech startup guy to my grandmother loves her and she’s an icon of Food Television.

When you’re one of the best, you constantly have to move forward to avoid losing ground to competitors, and quizzes are one of the ways Rachael is accomplishing that forward motion. This quiz in particular was a compliment to her daily show. It’s titled “What type of clutterer are you?” and was published the same day she had an organizing expert on her show. It was extremely popular and had thousands of likes and comments.

I’m gonna go meta here for a second and consider the scenario that led to her success. I don’t know about you, but when I’m watching TV I usually have my phone or tablet in hand. I’m either answering emails or chatting online or something. However, if I’m the TV shows’ producers that sucks because I’m not getting my audiences’ full attention. However, if you add a quiz to the mix that can be taken online while watching the show, you re-capture that person’s full attention. Part of the reason TV still rules the advertising game is because of how much attention we pay to it, and by adding quizzes to TV shows, you still get the full attention of your audience. 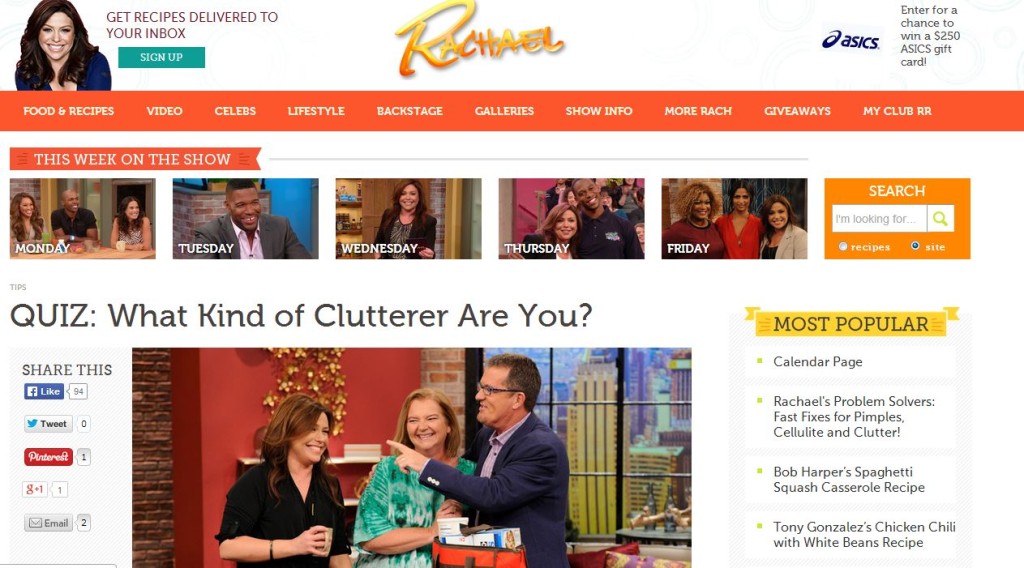 The only entrant on our list that used the Facebook embed feature, this quiz is simple. I say simple because I usually recommend that customers make their quizzes very specific, but in this case a broad quiz was very successful. 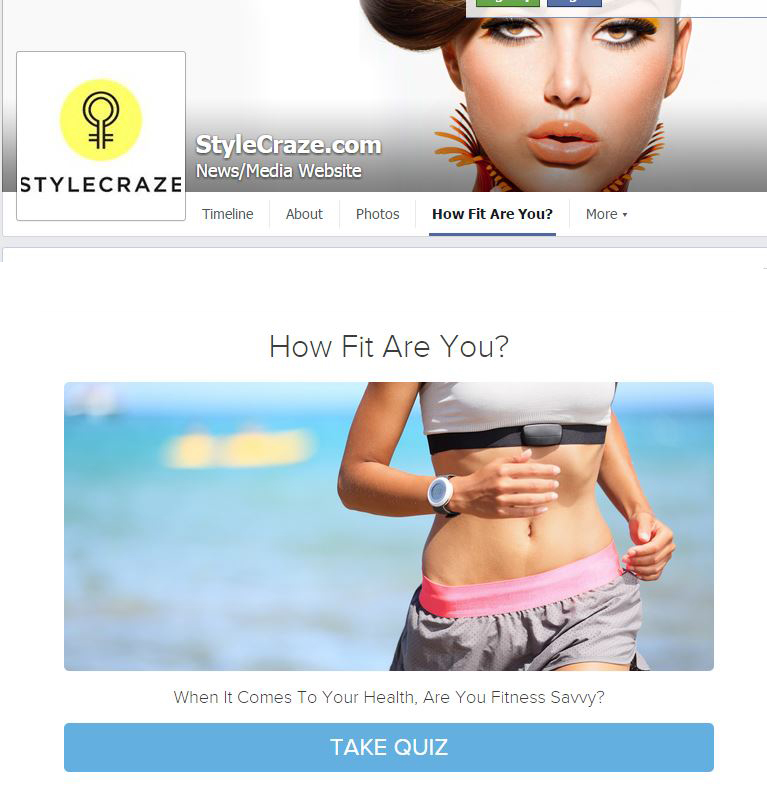 You know those posts where it’s titled something like “This one simple trick got me 10x traffic!” we all have clicked on one at some point or another, it’s okay. This quiz from HostelWorld could be the subject of one of those posts. It has one of the most indisputable cases for virality I’ve ever seen. Here’s the deal, HostelWorld has run two quizzes, the one pictured below, and another one about travelling technology. This quiz has 52,000 views and averages about 1,000 new visits each week (from search and social). The other quiz (which was posted and promoted in exactly the same way by the same company) only has about 3,200 views.

While 3,200 is no slouch for a blog post, the first quiz still got about 13 times as much traffic. This is the point where I should tell you what made this quiz so special, and there are a few things I can tell you.

-Use a lot of pictures: One big difference between the two quizzes is that the more popular one has a lot more pictures (especially of people)

-Make it very personal: “What type of traveler are you?” is a personal and controversial question for people who use HostelWorld (I know, I’m one of them). The reason being that the type of people who stay in hostels consider themselves to be more travel-conscious and citizens of the world, challenging with this quiz topic is smart.

Check out the actual quiz to see just how much fun it is.

It’s a surreal moment when a friend posts a quiz on Facebook and you click the link to find it’s one that was created using your product. The first time this happened, it was due to Studio C and their quiz prowess. They created a personality quiz for their TV Show to tell audience members which character they were, and the results were brilliant. Within minutes there were thousands taking the quiz, and the quiz continues to get views through search engine rankings and social shares.

Side note: This quiz was actually created by an agency who works with Studio C, let’s just say that agency got more than a few pats on the back. 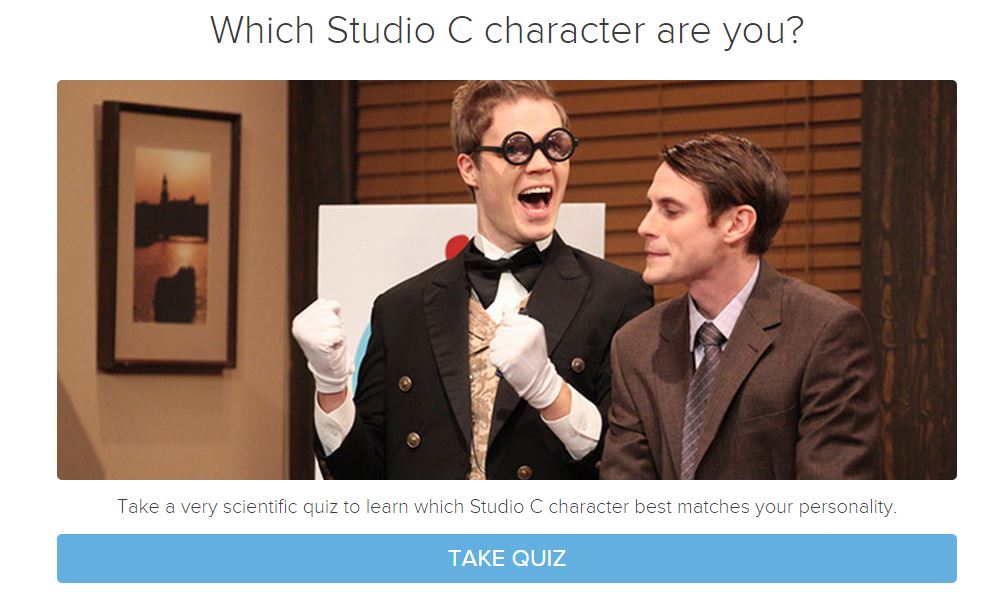 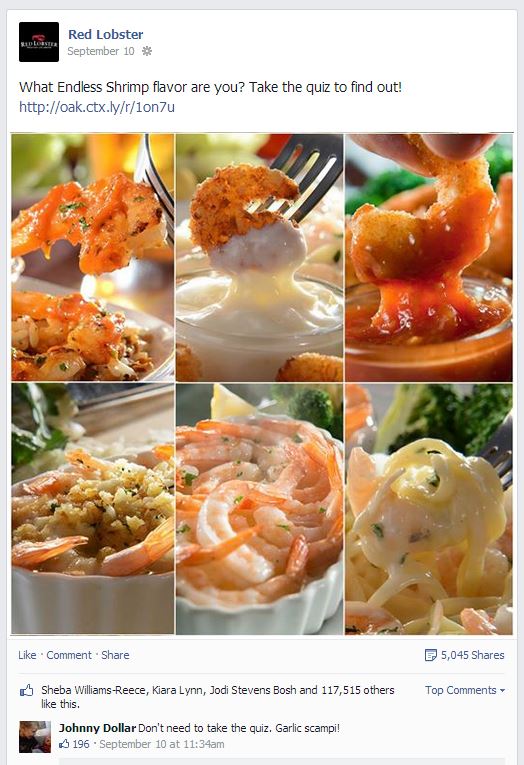 This quiz is one of The Red Lobster’s most “liked” Facebook posts ever, like since Facebook has existed. (it’s actually the most liked I could find after spending much too long scrolling through every single post but in consideration of my possibly overlooking a post or two I’ll say one of the most). It’s got 119,000 likes so far and isn’t done living its life.

How, you ask, does it only have 86,000 views? My guess is that our view counter pulled a YouTube and couldn’t keep up with the influx of traffic, but that’s okay because the results still rolled in for Red Lobster.

This quiz was used as part of the marketing strategy for the annual Red Lobster Endless Shrimp promotion, and was one of three key Facebook posts that really drove the social strategy. If nearly a quarter of a million likes and 25,000 comments are any indication, it was a successful social campaign.

The epitome of the long tail quiz, this one from Warrior Lodge has the most consistent traffic of any quiz I’ve seen yet. When someone asked Buzzfeed’s editor how she decided to start running a lot of quizzes, she mentioned that she started to notice quizzes getting a lot of trailing traffic (long after the initial social push). This quiz from Warrior Lodge fits that mold.

Warrior Lodge is a site funded by advertising revenue, so this continued traffic is a big deal. Also, given that the quiz has an average on-page time of 3:08, that’s some pretty valuable traffic.

Go to Google and search for “college quiz” Go ahead, I’ll wait here. If you actually did it, the first article that comes up is from Forbes, with a quiz titled “Find your perfect Match” built using Interact. Now “college quiz” and its contemporaries are not easy terms to rank for. There are entire companies dedicated to helping students find a college using a quiz, and yet they are all being outranked by this quiz that was built in about a week.

Because this is a popular term, it gets searched for 2,400 times each month, meaning that the Forbes quiz continues to get thousands of views each month with no further promotion beyond it’s initial creation.

Forbes has an advantage because they run a smart ad system, so each of those visits has a dollar sign attached to it in and of itself. However, if people just came and took the quiz then left, that would only be about 3 minutes of on-site time, which isn’t great. That’s why the writers added personalized links to each quiz results that point to other Forbes pages. For example, if someone is recommended 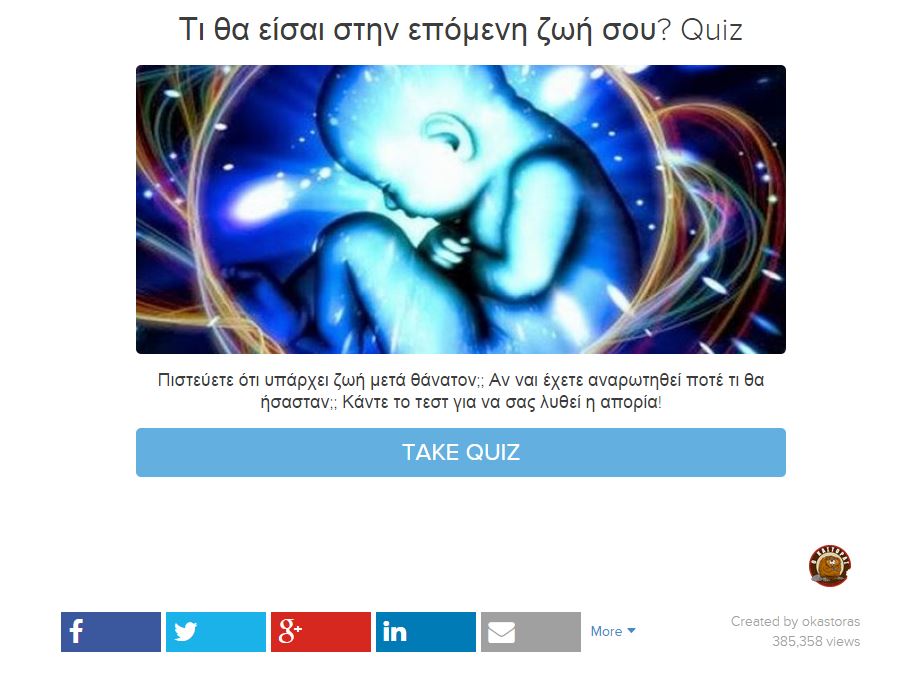 I included this one because it exemplifies perfectly the power of quizzes (and it’s in the top 10). Built by a viral content site in Greece, this quiz tells you what you’ll be in the afterlife. The host website only existed for about three months before they were taken down because of legal trouble (not related to the quiz). With zero brand recognition, no website authority, and a brand new site, they still managed to rack up nearly 400k views on their quiz.

Quizzes get 75% of their traffic from social (on average, across all quizzes) which makes it possible to start from almost nothing and have very successful money-making quizzes with no prior buildup. In fact, there is an entire website, called QuizCrunch, that was built only using Interact quizzes. As marketers, we can learn a lot from these examples and use the same tools to increase our audiences, no matter how small they may be to start. 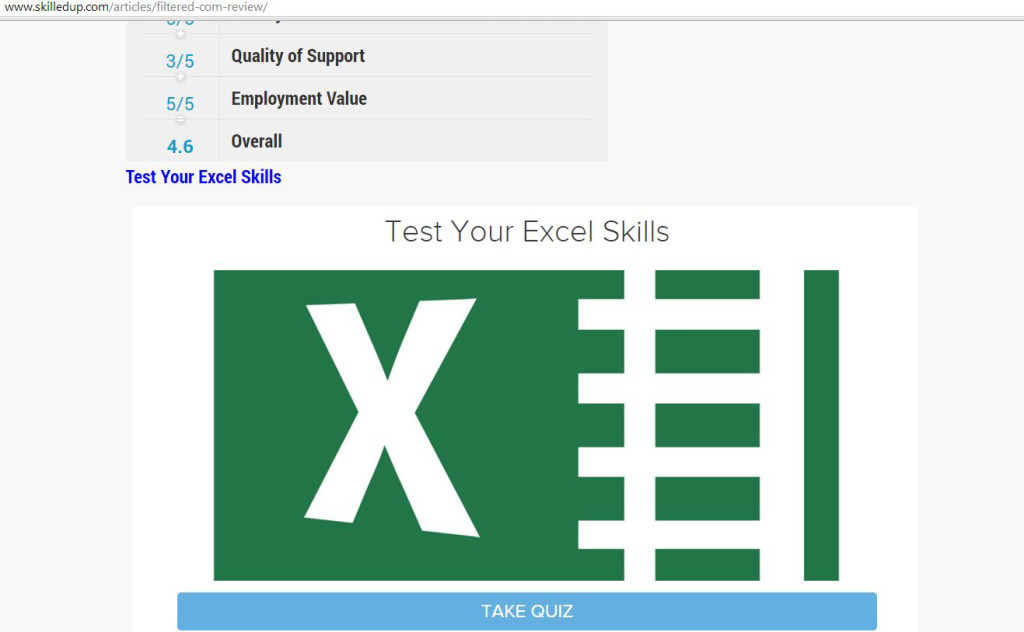 Skilledup was kind enough to give us a chance when Interact was a skeleton of a site and all quizzes still had to go through me. Luckily for both of us, the risk paid off. Since January 2014 when this quiz was launched, it’s racked up more than half a million views. What I like most about the quiz is that it’s not that interesting to the naked eye. If you were scrolling through news articles and came across one that was titled “Test your excel skills” you probably wouldn’t click on it (unless you are into Excel, then I’m totally wrong)

However, when that same quiz is embedded directly into a popular article about how to use Microsoft Excel, you are much more inclined to click on it.

You might be saying “so what, how does a quiz help you make more money?” ah, wise question. See, Skilledup has their quiz connected up to Mailchimp, so a the end of it you are prompted to put in your email address if you want to get updates about Excel (and since you are on a page about Excel you probably care about Excel). To date, more than 50,000 have put in their email address from this quiz, leading to healthy ongoing relationships which boost pageviews, which boosts sales and ad revenue which is excellent. 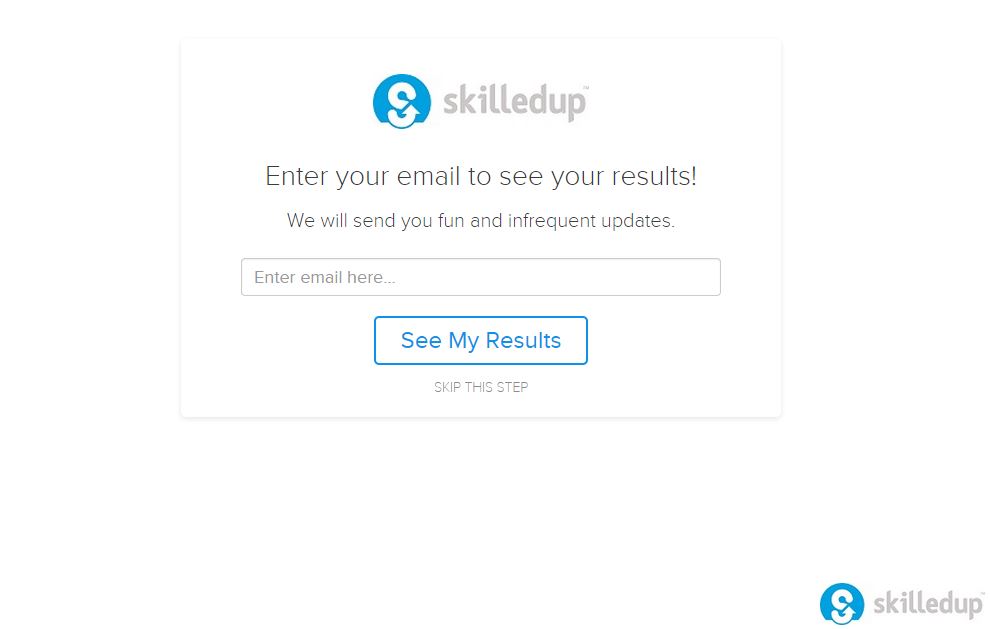 To make a quiz like these, head to tryinteract.com