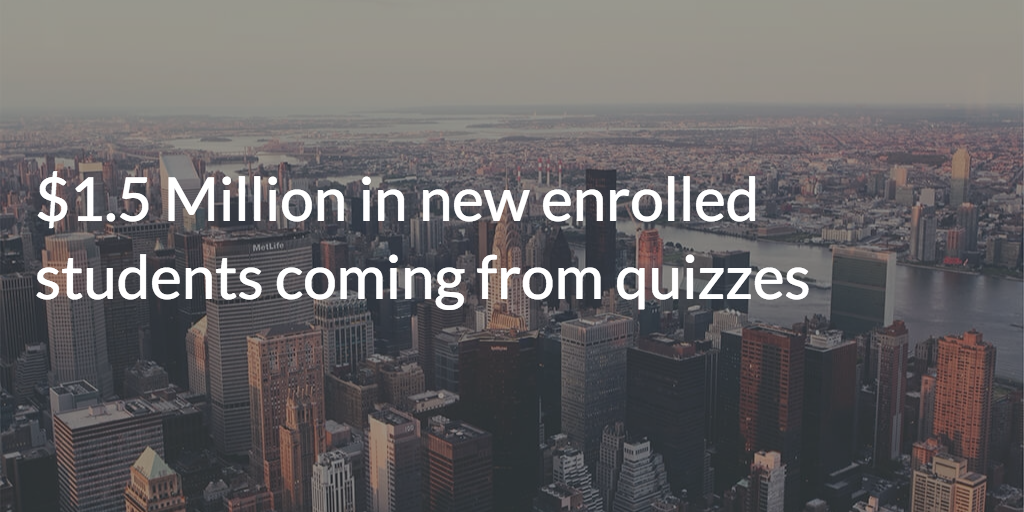 We have now confirmed the registration and payment of more than $1.5 Million in new student tuition for schools using Interact to generate new leads. As a company that goes to great pains in order to understand our customers and work alongside them, I’ve personally been a part in some way with every single one of these quizzes. Below is a list of what I learned.

1. Focus on what you’re good at when it comes to lead generation.

The way people usually say this one is “Don’t re-invent the wheel.” I dislike that wording because it sounds like you shouldn’t be unique. However, what it really means is to focus on what makes you unique and just follow the status quo in areas where you aren’t as strong. In higher education your greatest strength is the curriculum or program that you’ve put together and that should be the focal point of the quizzes you create.

That’s why 90% of the leads coming in through Higher Education have the same title “Which major/career should I have?” It’s been done hundreds of times, and I honestly think it can be done another 10,000 times without ever running out of appeal. The reason this same title can be used over and over again is because each school has a very special set of majors crafted for a specific purpose. It’s been done with a business school, a nursing school, an HVAC training school, a film school, and the list goes on (you get the idea). For a guide on how to create this quiz, click here.

2. Leads are useless without a plan.

I distinctly remember the day when I talked to two clients and had very different conversations. The first client had brought in 400 leads and was not continuing to use their quiz because they didn’t know what to do with the new contacts. The second client brought in 20 leads and each lead was worth $50 – they were doubling-down on quizzing. I was so taken aback by that that I launched a full-on investigation into what schools were doing with quiz leads to be successful… here’s the scoop.

The best schools are calling every lead to discuss the recommended major from the quiz. The call goes something like this.

School: “Hi there, this is Josh from Fun School, you just took our quiz about potential majors, do you have a couple minutes to talk about what was recommended?”

School: “Okay, was the major what you expected?”

Prospect: “Yah, actually, it was kind of what I was thinking”

School: “Awesome! was there anything in particular that drew you to this major?”

Prospect: “I just like (whatever it is that’s unique about the major)”

School: “That’s excellent, when were you thinking of pursuing this new path?”

Prospect: “Well I just lost my job so I’m thinking of going back to school”

School: “Sorry to hear that, but would you like to come in and meet with us in person to discuss this major even more?”

Prospect: “Sure, how does that work?”

School: Signs them up for an interview.

There is very little selling in that conversation, no one is trying to push value or promise ROI, it’s simply a conversation about the prospect’s interests. This is the genius of it, because that ends up converting much higher than if you go for the hard sell right away.

I think there’s confusion around how to use quizzes because they’re a relatively new concept in the lead generation process. The best way to describe what we do at Interact is “help brands drive more inbound leads from their websites and social media audiences.” Which means that quizzes are an excellent way of leveraging what you have and turning it into more leads as well as expanding to audiences similar to your existing customer base.

There are only two strategies I’ve seen drive consistent results for quizzes in higher education.

First, is a link in the main navigation of the site. On average adding a link to “majors quiz” or something along those lines increases inbound leads from the website by 25%, which can become really significant as the numbers add up. Also, the quiz is something a prospect might do first, which gets them in the CRM, and then they’ll come back and request a tour later, when that happens, the prospect converts to a student at a rate of 90%.

Second is social promotion, buying twitter and Facebook ads. This one’s more hit and miss. Some schools have an excellent social strategy and they already have audiences built within the social networks so they know exactly who to target with the quiz promotion. When all those things are in place a quiz can be an excellent social selling tool. If even one part is missing it won’t work.