Facebook ads are difficult because you don’t exactly know why someone is seeing the ad you created. With Google and any other sort of search-driven ad you know exactly what someone is searching for and can create an ad that explains how you can do the thing being searched for. With Facebook though, you only have a general idea of who someone might be based on their attributes.

What you then have to do is create an ad that gets that audience to click on what yo’d made. Since the majority of Facebook ads charge you for even showing the ad it’s super important that people actually want to click rather than just brushing past.

Over the last 5 years or so I’ve seen a lot of Facebook ads, mostly for quizzes, but also in the SAAS space and for B2B brands. Some trends have started to emerge that make up the difference between a boring ad that no one clicks on and one that really does a great job of driving traffic and conversions.

I can’t start this post without calling this out. When customers come to me asking for advice on how they can increase click-throughs from Facebook to their quizzes, the very first thing I look at is what topic their quiz covers. 100% of the time when the incoming complaint is that 0 people have clicked on the ad, it’s because the ad itself makes no sense for the audience you want to reach.

Typically the issue stems from this problem. People create quizzes and Facebook ads that are designed to get what the company wants. This means a signup, an opt-in, a new lead, whatever the goal is for the ad. The person making the ad knows that one of these goals is what they want to achieve and simply create an ad that works towards that goal.

This fails every time because it’s not what the potential customer wants.

Therefore the ad is irrelevant and I’m going to scroll right past it on my Facebook feed and you’ll waste all of your money, I’ve seen that happen countless times. So what you have to do instead is understand your audience and what they want. These things are way less obvious then you’d imagine, here are some example just to set the tone here.

1. If I’m an entrepreneur I want self-actualization, I probably want to know why I’m doing the crazy thing I’m doing

3. If I’m an online shopper I want to know if people think I look good, or if my taste preferences actually fit who I am

If you compare those things to “signup for my email course” and “buy my products” the disconnect is abundantly obvious.

But there is hope, if you really know what your audience wants, if you know what they’re trying to achieve, you can write ads that promise to give that. For example, your entrepreneurial course ad can say “Discover your inner motivation for being the founder you are, learn how you can use that drive as a positive thing and avoid wasting time on the wrong things” or for the shopping example you can say “Browse curated selections of clothing that match your style and always be looking fresh in your own unique way”

Hopefully that subtlety is not lost, because the difference between framing a product or service around what the customer actually wants versus just saying what you have to offer is what makes an ad drive positive ROI or just lose all your money. 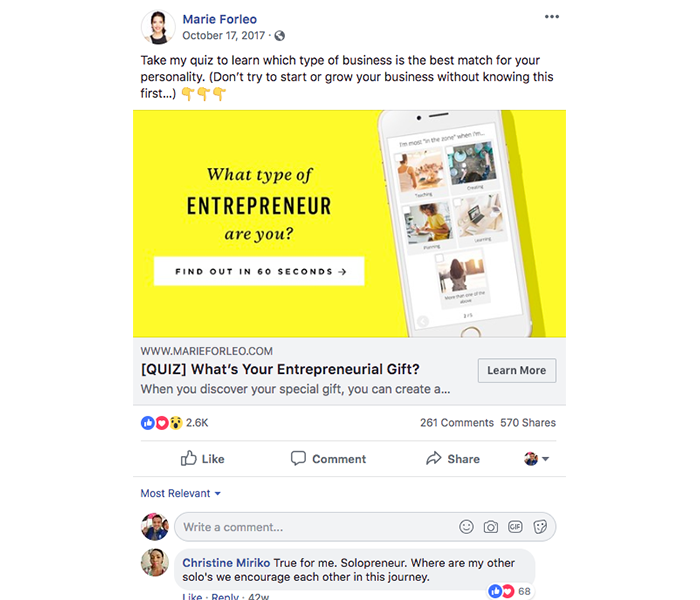 2. Make it about the customer

A few years back we ran a study about what makes quizzes get viewed and one of the things that really stood out was quizzes using lost of personal pronouns like “You” “We” were heavily correlated with getting more views. We all care about ourselves, we spend a lot of our time and lives thinking about ourselves, and if your ad is about the people it’s targeting and speaks to them personally it changes the perception of it and all of a sudden it’s about the person and not about some issue or problem or external thing.

Let’s talk through how this would work. Let’s say you’re advertising a course on online marketing.

Anonymous Ad Title: Check out our online course for creators and learn how to make more money online!

Personalized Ad: You Are A Creator: Making Money is Nice Though, We Created This Course For You, The Creator, to Learn How You Can Make Money Doing What You Love

A friend who works in tech told me yesterday that he can say the same exact thing in different ways and when he personalizes the message to different groups they respond well as opposed to when he just sends out a general memo and every faction of his team has a million questions about how it applies to them. People are only interested in how things affect them, if you understand that and make sure that every ad is created for the exact person you want to see it then you’ll get more click through.

3. Use the right images

We ran a study a while back and found that pictures of smiling people get clicked on more for quizzes. The research behind it is actually fascinating. Have you heard the stories about people who raise ducks and the ducks imprint on the human owner, thinking it’s their parent and then they follow that person around their whole lives?

Well it turns out that humans do something very similar, when we’re babies we imprint on faces as an evolutionary safety mechanism so we know who our parents are. Then what happens is that we are pre-disposed to look for faces the rest of our lives, which is why we pay more attention to faces on Facebook ads than just about any kind of image (on average, variations for sure happen). 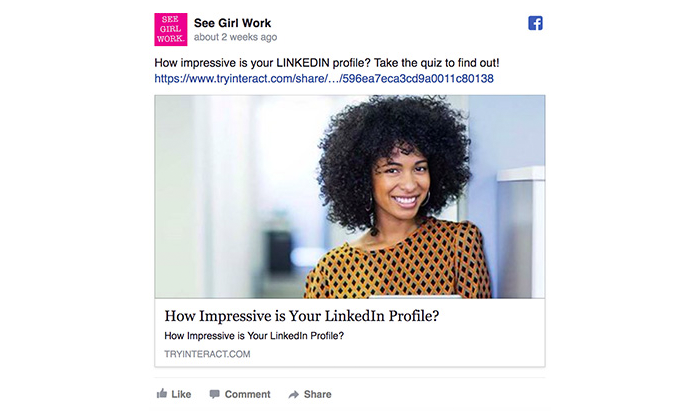 Literally at church this morning the pastor was talking about how we’ve gotten so many choices and so much freedom with everything in our lives over the last 50 years that there is now a huge push back towards simplicity. He was sharing the story of an HBO documentary about an actress who dropped everything to become a monk, super thought-provoking stuff.

The point to all that is people are tired of having too many options and always having to choose between things that look enticing but might not be right. There’s a movement back towards reality and being upfront with what you can do that’s useful. I’ve seen a lot more bullet points and numbered lists in Facebook ads outlining exactly what you’ll get if you take the offer.

It often works best just to be honest with what you have to offer rather than trying to oversell it.

5. Cover images in a dark filter

I have no idea why this one works. I read about it on this blog and then tried it with our own Facebook ads, and sure enough we got almost twice as many clicks on the dark-filtered one. My guess is that maybe it looks like it’s loading and people click to see the full thing. In our case we also got more conversions after the fact so it wasn’t just like people clicked and all left afterwards.

This one’s not my favorite because it’s kind of tacky, and it certainly won’t fix your ads if they are just terrible to start with (see point #1). However, it can be used to improve an already-well-done ad that you have running. 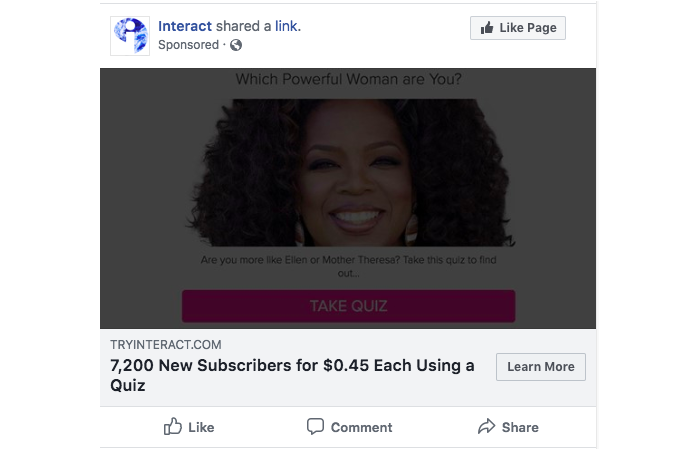 One of my biggest pet peeves, which thankfully is backed up by research , is when customers come to me and say “I need my audience to be afraid and know what they’re doing wrong so they’ll want to buy my products.” No, you don’t need your customers to feel bad about themselves, you don’t need to be a bully to win.

What you can do instead is explain how you can help people improve their already awesome lives with what you can offer. No one wants to hear that they’re doing poorly, that’s demoralizing at best and debilitating at worst, you’re less likely to take action if you think you’re not doing well, but if the pitch is “You’re doing great, let’s keep that momentum going by adding onto it” that’s something we can get excited about.

Don’t ruin the momentum by trying to tell people about how bad they’re doing without you.

Color psychology for Facebook ads is a big deal. I won’t go into it too far, Adespresso did a great job of that in this article. If I had to simplify this down it distills to one story I remember really well, which is that fast food places like McDonald’s are usually red and yellow because those colors make you hungry and insinuate being cheap.

There’s a meaning to every color, and depending on what you’re trying to convey you want to choose the right colors that display the meaning you’re trying to show in your ads and for your products. 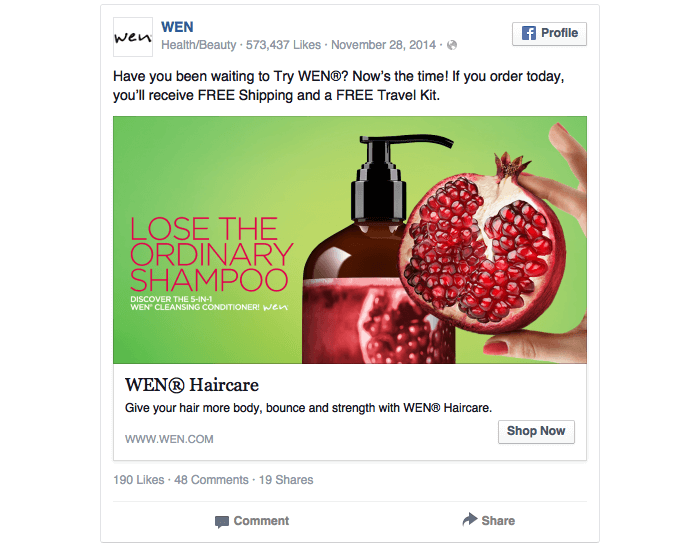 Ads with emojis get clicked more. That is all, but what it reminds me of is one time I was listening to the first investor at Snapchat talk about how they find companies to invest in, and the thing that stood out to me from that lecture was that they look for when new platforms emerge they can invest in. The example I remember was how Xbox created a platform for new games to emerge.

That’s a disjointed story, but the point is that emojis are new, so not everyone has them yet, and that means you can stand out from the crowd by having them on your Facebook ads.

Something else will come along next and emojis will become normal so they’ll stop working as well for attracting attention, but if you keep up on what’s happening in the world of Facebook ads and do whatever is newest you’ll stand out.

So the entire premise of interact existing as a quiz building tool is that people like to answer questions, especially about themselves. Just as a quick example, if your Facebook ad fora a skincare product says “Do You Have Healthy Skin?” that’s way more enticing than “New Skin Moisturizer” The thing with the question is that it’s applicable to the person who sees the ad and appeals to them on an individual level, rather than just being generic. Also we like to talk about ourselves as humans, that’s just a thing we do, we can’t stop ourselves from answering questions.

Facebook ads are an art and a science. I recommend spending a lot of time testing and learning if you have the capacity to do so. In my own tests and in talking with customers who run a lot of Facebook ads, they are not something you can simply set and forget, you have to be actively engaged and really know the new trends in order to maximize your spend and not be throwing money away.